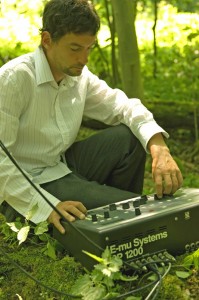 Britain’s Bonobo, aka Simon Green, has been called one of the downtempo pioneers of the last decade or so with his work with the Tru Thoughts and Ninja Tune labels. His strict attention to intricate basslines—which serve as anchors for the slow-building epics he constructs—show his extraordinary care for his material. Live instrumentation has played a big role as well, as Green has often presented his work with a full band, he himself on the bass (tonight’s just a DJ set, however). His work with vocalist Bajka makes his work more towering than you would expect—the forming of harmonies (choruses, really) make mountains of sound, especially on 2006’s “Days to Come,” his last full-length release. Television’s noticed, too—Bonobo tracks have appeared on shows like “Lost,” “House M.D.” and “The L Word.” Expect a decidedly chill evening. (Tom Lynch)