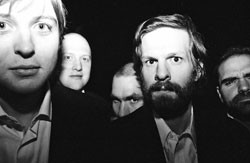 A goofy, lovable and smart band straight outta Chicago, Detholz! (pronounced “Death Holes”) have such an amusing take on pop music one has to wonder if there’s any limit to their zaniness. Known partially for their Devo-esque live show, Jim Cooper and crew have covered such kitschy classics as Joe Esposito’s “You’re the Best,” Eddy Grant’s “Electric Avenue” and (the king of them all) Starship’s “We Built This City.” Add some pretty bizarre (in a Talking Heads kind of way) record releases—with songs like “Spectacula,” “Club Oslo” and “Smellovision” bringing some danceable synth-fun—to convince the more serious music fan that the guys aren’t merely some ironic cover band. And even if it is after Christmas, if you ask kindly, maybe they’ll bust out their new demo, “Ghost of Christmas Palsy.” (Andy Seifert)