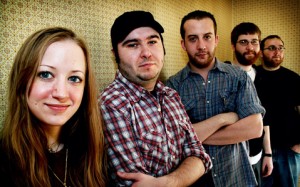 Tonight’s the release party for local indie-pop outfit Kid, You’ll Move Mountains’ “Loomings,” a nine-song mood-shifter that opens with the powerful, pretty “Inside Voice” and then without putting on the brakes plows into “Volts,” a Rainer Maria-like pseudo-experimental display with dueling male-female lead vocals and overflowing vintage-emo swagger. Maybe the band’s too serious for its own good—however, when the group allows weirdness to creep in a bit, like on the expertly titled “I’m a Song from the Sixties,” the record reaches its high points. The band’s name, which has gathered much attention already, comes from Dr. Seuss of course, but it’s also the title of one of Dan Snaith’s near-perfect songs as Manitoba (or, er, Caribou). Overtly poppy at times, overly emotive at others (one could’ve done without “West”), “Loomings” shows considerable craft and, even more evident, care. These songs were sculpted and kept warm. (Tom Lynch)