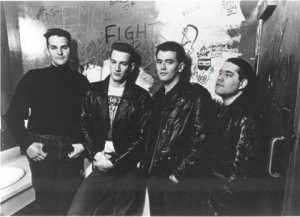 Chicago’s own punk-rock pioneers Naked Raygun have a special place in the city’s collective heart, having been one of a handful of early eighties Chicago punk bands to turn the city away from blues and metal (as well as bury the rotting corpse of disco). Lead singer Jeff Pezzati and his cohorts squeezed their way into the scene, released a couple of notable post-hardcore albums, raised some havoc and promptly called it quits in the early 1990s. But—look out!—they’re back. After reforming for Riot Fest 2006, the band thought, “What the hell?” and went for a full-fledged reunion, in the process releasing a DVD, “What Poor Gods We Do Make?” that tells the Naked Raygun story, harking back to a day when punk was a new haven for social outcasts who thought Journey was lame and reasoned that George Michael should die. With an energetic hardcore attitude, a couple of sweet melodies and sing-along choruses, the band’s badass live show built a loyal following whose message still resonates today: slow, wimpy music sucks. (Andy Seifert)