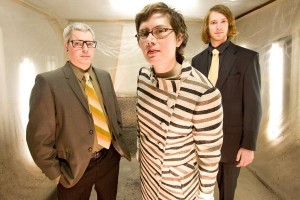 Now this is a Chicago band. Quatre Tete makes use of complex, often ear-splitting song structures and riffing, angry half-spoken/half-screamed vocals and driving drums that do more than hold their own amidst all the upheaval. The band even got Bob Weston, of Shellac and Mission of Burma fame, to work the board on “Art of the State,” the trio’s new record on Bec-Rec, and the perplexing, viscerally adventurous blending of prog-rock, punk and metal-riffing makes for a rather towering piece of work. The sound these three can achieve rivals the heaviest of heavyweights—pure adrenaline, blisteringly cold and dark, this record sounds like Chicago, especially at this time of year. One could argue singer-guitarist Mark Bartak’s voice is a little too mid-nineties emo-punk at times, but that concern is quickly lost as soon as the band forces the melody directly through your face. There’s not a hell of a lot of reasons to venture out into the frigid misery of this city’s first week of January, but this, I assure you, is one of them. (Tom Lynch)