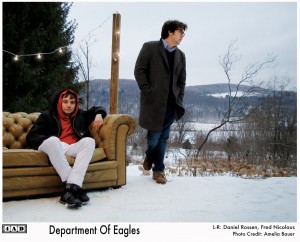 While almost all of Chicago’s music festivals lay dormant through the cold winter months, Schubas opens its doors this week for the fifth consecutive year of its now-five-day music festival, Tomorrow Never Knows.

What started as a two-day over-sized record-release show for a number of local bands has now evolved into an entire festival of national and area acts, DJs and, new this year, in-store appearances at Reckless Records. “I decided to just go all-in here and take five days in the middle of the month, around Martin Luther King Jr. Day, and try to pack it with some bands,” says Matt Rucins, talent buyer at Schubas.

During this week’s festival more than thirty bands and DJs will perform in the main room and the upstairs lounge at Schubas. But convincing bands to agree to drive across the country from the East or West Coast, in the middle of January, in increasingly tough economic times, isn’t always an easy task. “I have a list of twenty bands that I asked to play that weren’t available because January is not the most ideal month to get bands to get on the road,” Rucins says.

“If I tried to do something like this in the summer, it would get completely drowned out by every street festival that happens every weekend,” Rucins says. So, he and the folks at Schubas have decided to leave the summer months to the neighborhood festivals and destination events like Lollapalooza and Pitchfork Music Festival. TMK 2009 features bands such as Cursive, Department of Eagles, Miles Benjamin Anthony Robinson, The Soft Pack, Allá, Disappears, Hey Champ and Bishop Allen.

The Thursday night audience at Schubas will see one of the most critically acclaimed bands of 2008, Department of Eagles (pictured), featuring Daniel Rossen of Grizzly Bear, performing for the first time in Chicago.

Even with its sophomore full-length, “In Ear Park,” released on 4AD, making several best of 2008 lists, Department of Eagles isn’t going into Tomorrow Never Knows under the assumption that it has already won over the audience. “I think that the best thing that we can do is just try to have fun with it, and not rely on the fact that other people know who we are before the show,” says guitarist Fred Nicolaus.

While Rossen has been busy over the last few years with Grizzly Bear, he and Nicolaus have only been able to write and record songs for “In Ear Park” while Grizzly Bear was on breaks from extensive touring. This meant that Nicolaus and Rossen saw these songs take shape slowly over four years before ever playing them live.

The group’s first full-band show was just over three months ago. “When you make music and you don’t really play it live, until you go out and people have shown up to see you play, it’s a very abstract concept,” says Nicolaus, “So when we first stepped out on stage at this show, just to see people who were there actually to see us play was a really big shock to me. I think that was kind of a moment of realization.”

One of the Chicago-based bands taking the stage during the course of the festival is Allá, also on Thursday night. (The band will also be performing Thursday’s free in-store show at Reckless Records earlier in the afternoon.) Fresh off the heels of its debut full-length record, “Es Tiempo,” which was released in June on Crammed, and on the cusp of its first European tour and a new EP, “Digs,” in the spring, Allá couldn’t be more excited to be a part of the festivities.

“This show, at Tomorrow Never Knows, is a showcase, so we really have to condense what we do,” multi-instrumentalist Jorge Ledezma says. “We have a limited amount of time, and there are so many bands, so we want to try to get our point across as soon as we can.”

This mix of established national talent along with a good dose of up-and-coming local artists is one of the  most appealing elements of Tomorrow Never Knows. The heavy hitters sell the tickets and keep the place packed, and it gives bands like Allá an audience that they wouldn’t have otherwise had.

Five years ago when Rucins, along with Jeremiah Wallace from the band Paper Airplane Pilots, hatched the idea to hold a music festival at Schubas in January, they looked to The Beatles for a name to call their event, and they used the track title of the last song on “Revolver,” “Tomorrow Never Knows.” But as well as an obvious nod to the Fab Four, “it’s also a reference to some of these bands playing,” Rucins says, “and that tomorrow never knows where they’ll be.”