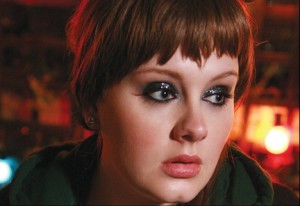 It appears that, at some point, all those hair metal bands of the 1980s had children that became female British soul singers. How else can you explain the outbreak of these English twentysomething divas who implode in the midst of any public situation (Amy Winehouse), create feuds with their American counterparts (Lily Allen), and freely inject themselves with copious amounts of narcotics (take your pick). But here comes Adele, a 20-year-old sensation, who’s kinda compelling just because she’s not in any trouble (yet). Adele’s debut album, “19,” shows that even a relatively straight-edged kid can belt out the blues (even if it appears the only negative in her life is that she can’t hold down a relationship for more than four months). Adele’s supposed inspirations—Etta James and Ella Fitzgerald—manifest themselves in an endearing vocal performance that’s unfortunately forced to share the stage with the glam, syrupy production of Mark Ronson, Eg White and Jim Abbiss, who almost completely sucks out the soul of the music. Which, you know, is a pretty damn important part of soul music. (Andy Seifert)