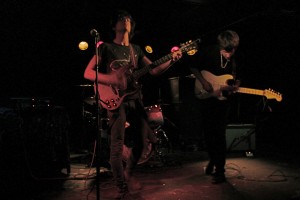 What does youth sound like? If you’re 18 years old, it should sound like angst, like alienation, like catharsis. Like Joy Division, but more fun. After local trio Stranger Waves made its debut at Empty Bottle not too long ago, a buzz began that this team of teens had the chops to channel Curtis and crew and some seventies punk, that the band was an onstage explosion of garage rock, two guitars, no bass, energized drums and a whole lot of yelling. Essentially, the band can bring it and, in the end, what else can anyone ask for? Who knows what’ll come from this trio, still very much in the infancy stages, but the songs I’ve heard, especially the jangly, weirdly motivating “Bad Acid,” are genuinely thrilling.

“Our songs right now, I don’t know how to explain them,” guitarist Ziyad Asrar says. “The thing is, we just get together and write songs, we don’t try to go for a genre or a certain sound.” Asrar, 18, says he’s mostly inspired by Joy Division and that the band, when it started, was more into the hardcore of Minor Threat or Black Flag, but now it’s opening up more. “More Yo La Tengo, definitely,” he says. “We listen to a band we like, and we try to emulate a certain beat that they’re doing, and the guitarwork and melodies all just come from improvising, when we’re writing. We’re gonna stick with our sound now, but the direction we’re gonna go—it isn’t more clean, but [there is] definitely a little bit more Motown influence going on. I’ve always been into doo-wop. I grew up listening to that. My dad used to listen to it a lot.”

He’s not worried the band will get too soft, however. “Generally, we’re a rock band,” Asrar says. “We’re never gonna get too clean-sounding, I guess. Definitely, for us, writing music is an art form, though. We take it seriously—but it’s really fun for us, too.”

It’s not terribly difficult to imagine a teenager taking his work seriously, nor is it difficult to understand why the same teenager would be annoyed with hearing about how young he is all the time. “It’s a little bit…it sets me back a little bit. I don’t know what to think about it,” he says. “I don’t consider myself a kid. Writing music, you know—I’ve been playing music for a long time, as long as I could be. I mean, I just love what I do. I consider it more than just playing and performing. I write songs, I write poetry—it’s hard for me to hear that sometimes, being called a kid. I guess I maybe display that on stage. I kind of lose my mind when I’m on stage.”

Asrar says that the band’s been sharpening a cover of Wreckless Eric’s “Whole Wide World,” a classic which, with its stirring optimism and sweet naivete, seems a perfect fit for this band, who’s already made an impression on this town.

“It was really surprising,” he says of the response to the band. “I didn’t expect people to dig it at all really. We worked on the songs for over a year, played through our set a million times. These songs, I forgot how good they were, the excitement I felt when I first wrote them. It’s a good feeling. I mean, I don’t know. I’m content with what’s going on now.”