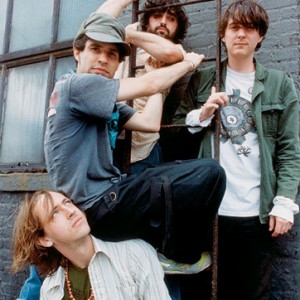 This is what happens when no one’s looking and the children get under the sink. A contrarian response to the substantially acclaimed isn’t so uncommon amongst the masses—plenty of people ponder “What’s the big deal?” with Arcade Fire, Deerhunter, even Radiohead—but you wouldn’t believe the uniform response I get when I voice how I dislike avant-garde pop unit Animal Collective. “You just don’t get it,” my friends will say, often followed by “I thought more of you.” “I really thought you would like it, I’m a little disappointed,” one recently said to me. “Fuck you,” was offered once. I’m exaggerating (no I’m not), but you would think after the widespread love explosion following the (official) release of AC’s new—after much publicized leaking—“Merriweather Post Pavilion” any and all detractors would be put to death, publicly stoned with different sizes of bongos. The band’s ninth full-length record—I think it’s number nine, I don’t really care—expands further on the experimental, freak-folky psychedelia with more electronic bits and pieces and various vocal harmonies, essentially adapting “Pet Sounds” (like that’s a big fucking surprise) for the new millennium. Listen, I first got into indie rock in high school in an effort avoid musical “community” and dickfaced drum circles rooted in optimism, and I certainly don’t have any interest in a pairing of the two, and honestly, nor should anyone else. Most hipsters are terribly annoying—those who close their eyes and bob their heads to an assemblage of empty, meaningless noise as part of a “cathartic” and “unifying” experience take it to a new level of hopelessness. (I can think of one kind of Panda Bear I wouldn’t mind succumbing to extinction, har har har. I’m awesome.) Am I nauseated by the scene more than the actual music? Sure, but the music’s not too far from catching up, and that doesn’t matter anyway, because while I used to not hold the band itself accountable for its fans, now, with Animal Collective’s persistence, you pretty much have to. But while “Merriweather Post Pavilion” is the most tolerable thing the band has excreted thus far, nothing Animal Collective ever compiled has struck me as anything more than masturbatory drivel that’s rooted in laziness and self-obsession. I find AC’s breadth of work (work?) boring, sure, but more than anything else, I’m depressed by it, irritated by the creators’ prolific nature and apparent determination to end most of my friendships. The music doesn’t seem present enough for me to actually be offended by it—this isn’t Creed—but if I wanted to hear the sound of someone jerking off into a toilet bowl, I’d just go do it myself and get on with my miserable, pathetic winters day. (Tom Lynch)