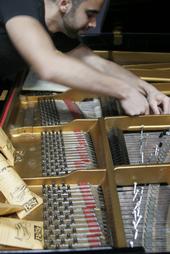 The miraculous instrument that today is known as the piano was originally called the pianoforte (literally, “soft-loud”) because of its unique ability to perform music as soft or loud as the performer desired via finger touch and foot pedaling. That served composers well for a century and a half or so, but wasn’t quite enough for John Cage, who began experimenting with other methods of altering the sound of the piano after World War II. Although technically a percussion instrument since the performer strikes the instrument via a keyboard that then triggers a series of hammers, what the hammers hit is actually an elaborate system of tuned strings, so the piano has always been a hybrid percussion and string instrument.

If, Cage reasoned, objects were strategically placed between the keyboard, the hammers and the strings, the timbre of the piano could be considerably widened, and thus the “prepared piano” was born. If you have an upright piano at home, you can replicate one of his earliest experiments by opening the lid and placing thumb tacks on the hammers which makes the metal end of the tacks strike the strings, giving the piano a bright, metallic sound.

But as time went on, Cage began adding all sorts of objects—from small pieces of paper to metallic industrial objects—to the inside of a piano, each composition having its own carefully notated system of sound-altering objects minutely placed which, when performed on a grand piano, can be seen by the audience as the performer actually “prepares” the piano between pieces. This means, of course, that the performer be as much a master of being able to prepare a piano on the spot as to be able to play these pieces and, luckily, Ann Ward and Adam Tendler are masters of both the technical as well as the musical demands that Cage spells out in his Sonatas and Interludes for Prepared Piano. (Dennis Polkow)