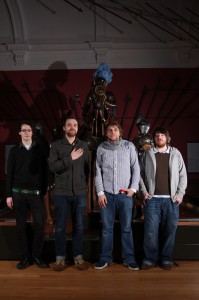 Scotland’s Frightened Rabbit had its breakout year in 2008, releasing sophomore record “The Midnight Organ Fight” (Fat Cat) to substantial critical acclaim, solidifying the band’s place as one of the most exciting, relatively new, relatively straightforward rock acts to emerge in some time.

“Sing the Greys,” the band’s debut album from 2006, showed promise—as strong, youthful pop records tend to do—but “The Midnight Organ Fight” introduced more grit and gravel. Singer/guitarist Scott Hutchison went through a debilitating breakup at the dawn of the writing process, and this record emerged; at no moment does Hutchison trick sympathy out of you, however. The album isn’t cheap. An honest document of emotional collapse sounds nothing like Dashboard Confessional. Frightened Rabbit boasts the unusual upbeat indie-rock sound where major chords and catchy hooks dominate the record but you still sense desperation, more than just a hint that the creation of this album was part of a coping process. (There’s only one fingerpicked-acoustic ballad, I swear, but it’s a heart-stopping gem called “Poke.”) More meaty songs, like the devastating, perfect opener “The Modern Leper,” piano-driven charmer “The Twist” and blazing rocker “Fast Blood” leave  lasting impressions. I adored plenty of records from last year, but I was only truly moved by a select few, and “The Midnight Organ Fight” was certainly one of them.

“2008 was quite simply the most wonderful year of my life thus far,” Hutchison says. “We never thought that our record could take us to the places it has. It’s funny that we now refer to the album as though it just appeared from nowhere with the songs all ready to go, meanwhile forgetting the months of work that went into its conception. It’s nice that the work ethic has paid off. It would be soul destroying if not. I really put everything I had into it.”

He says that through the success the band’s acquired a new sense of poise. “We’re a little more confident in ourselves and it’s a much more focused affair now,” he says. “I don’t mind saying that until this record came around, we didn’t think we were a proper band. It was still just messing around to an extent. Sometimes it still is, but this year has seen us tighten up…as far as we humanly can.”

Hutchison says that writing a breakup record wasn’t his intention; he didn’t sit down with the aim to emote. “I didn’t set out that way, but I had broken up with someone and a theme began to emerge,” he says. “I think that came from being unable to think or write about anything else. It was a very big event in my life, and one that evoked a great deal of feeling in me. I like writing about humans though. Even though there’s no breakup to write about [for the next record], I’m still fascinated in trying to express fragments of human relationships.”

When the band constructed “Sing the Greys,” songwriting was still a hobby, but when it came time to work on its follow-up, a greater scheme, a future, became more visible. “I felt more valid as a songwriter somehow,” Hutchison says. “I suppose I approached the ‘Organ Fight’ with a sense that I can make a career of this and I am quite good at it, goddammit!”

Fat Cat suggested the band release a live acoustic album, and last fall “Liver! Lung! FR” hit shelves, a recording of a Glasgow show in which the band performs “The Midnight Organ Fight” in entirety. “It was just fun to make a night of it and have a souvenir in a nice little cardboard package,” Hutchison says. “[The songs] were all conceived fairly ‘acoustically’ so it’s not strange to peel them back to that. The songs may sound a lot sadder in that context. They aren’t wrapped up in bombast any longer, so I think it’s possibly even more honest than the original recordings in a way.”

After this tour the band’s hard at work on the follow-up to “The Midnight Organ Fight,” sure to be highly anticipated and possibly in our hands much quicker than one would think. “I just want to keep them coming,” Hutchison says. “This is now our job, and it’s a rather pleasant one, so we want to keep working hard and making music. I would hate to be doing anything else, so I can’t wait to produce another album. I guess we’ll hit the festivals over the summer, but only if the album is done. There are lots of new approaches we want to try out, but we don’t even know what they are yet, so I suppose the proof will be in the pudding. Perhaps the next record will be called ‘Pudding.’”