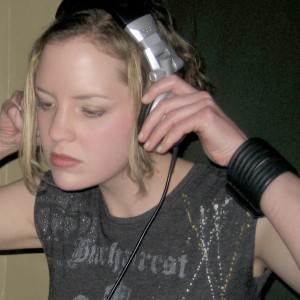 In 2002, Chicago-based producer and multimedia artist Liz McLean-Knight (aka Quantazelle) started her IDM/techno label subVariant Recordings. Of all the genres underneath the electronic-music umbrella, producers and fans of techno and IDM tend to take their music quite seriously. But, in the name of levity, subVariant’s first release was a Quantazelle album entitled “Coaster.” The album came with a tongue-in-cheek set of detailed instructions explaining how to use the CD as a beverage coaster. subVariant’s second release, a compilation entitled “Subvaritrax,” also made creative use of its liner notes. This CD came with a lengthy warning label similar to a bottle of prescription pills, with phrases like “For temporary relief of Sonic Mediocrity Overexposure (SMO)” and “WARNING: Not a pop album.” Liz was also acting as editor of the online music magazine Modsquare. She produced electronic-music events that allowed registered Modsquare users to meet up at clubs, trade CDs full of samples with other producers and then post tracks online using each other’s sounds.

In 2008, Liz’s Ramp Chicago had a successful run of monthly techno events in the basement of Debonair Social Club. She decided that resurrecting the subVariant label would provide more opportunities to produce events with an interactive twist. She says, “I did a lot of searching to find alternative venues…to get a bigger space that would bring in more people, in order to have the caliber of talent I’m interested in bringing.” For its label re-launch, subVariant will host Berlin-based producer and DJ InsideOut at Vision Nightclub. The NYC ex-pat and co-owner of minimal techno label Clink Recordings will headline with local DJs Hernan Sanchez, Gianna Hardt and McLean-Knight (as Liz Revision) supporting.

McLean-Knight notes she “was looking for creative and interesting ways to package promotional products—like the coaster—that add an element of humor.” subVariant distributed an InsideOut mix CD to clubbers with a wrist strap, making it easy to carry while dancing. The first fifty patrons to attend the InsideOut show will receive limited-edition art pieces—buttons created especially for the event by local designer Justin Kohout. subVariant will also debut Loop Points, an event-based loyalty card. If event patrons accrue four points (the musical time signature of techno is 4/4), they will get a special mystery gift. For those of us who aren’t thrilled by bikini-clad girls on club flyers or dropping a couple hundred dollars on a club’s VIP bottle service, McLean-Knight’s creative approach to producing electronic-music events in conjunction with design, multimedia art, fashion and technological innovation is a welcomed one. (Elly Rifkin)

[…] City did a great feature on the subVariant relaunch party with Insideout called "Spin Control: Coasting Once Again". It’s also the #1 "Show to See […]