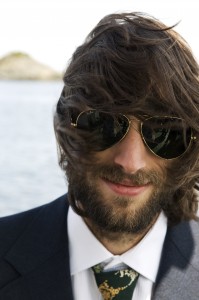 Known best for being at the forefront of the current Scandinavian disco revival, mid-tempo dance maven Hans-Peter Lindstrøm is touring the U.S. in a rare three-date mini-tour behind “Where You Go I Go Too,” his follow-up to 2006’s “It’s a Feedelity Affair.” While his initial solo effort was mostly a collection of previously released singles, his latest all-new effort (released Stateside in December) has landed itself atop many critics’ best-of-2008 lists, including influential tastemakers at XLR8R and Pitchfork. And while the disco bug has been virulent over the last couple of years, spreading from producers and remixers to find places in DJ sets and Blogosphere playlists from across the musical spectrum, Lindstrøm approaches his growing success with a detached curiosity.

“There’s so much good music in the past that if more people get into the old music, and maybe another way of making music, then it’s really good,” he says, speaking from his home in Oslo, Norway. “If disco is only going to be this year and maybe next year, nevertheless, I’m not able to control it. I’ll just keep doing what I’m doing.” (And by the way, calling his music “disco” or “nu-disco” is just fine, but please avoid the popular “cosmic disco” tag. “Kind of corny,” he says).

Lindstrøm’s individualistic thinking is apparent in everything he does. Exhaustion with the rehearsals and setup required to be in a band led him to DJing, which eventually led to production. His brand of disco edits with psychedelic-tinged audio-dramatics might be elbowing its way into dance aficionado’s shelves previously stocked with minimal house and techno, but his latest opus is a risky three-track release of instrumentals clocking-out at just over fifty-five minutes.

“Where You Go I Go Too” is a winding musical story, complete with a sonic three-act structure. The album-titled lead-off track establishes the characters and setting, with initial deep bass warbles in sinister keys giving way to sunnier melodies and chords, as a building disco beat gives sufficient inertia to bounce through near-thirty minutes of sweeping synths. Disco guitar licks warm Lindstrøm’s patented sonic permafrost tricked-out with lonely chimes, ambient playground noise and disembodied breathing. The second act “Grand Ideas” opens with rewind noises and an Italo-edged handclapped beat. As famed Norwegian playwright Henrik Ibsen was noted for reinventing reality, Lindstrøm recaptures the sun-drenched feel of long summer days, with the Italo stains so influential to his youth being remade in his own unique way. The third and final track, “The Long Way Home,” starts with a maddening and dizzying arrangement of synth noise and guitar, which eventually gives way to chilled-out electronic funk…dareIsay resolution?

“[It was] nice to write and record it, [but] it was a nightmare to finish it,” he admits. After working for months on a pop collaboration with a singer, Lindstrøm had hit a creative brick wall. He decided to shelve the project, and begin working on his next solo album. “To get the whole picture of a track, the best thing is to listen to it from start to finish,” he explains. But due to the length of the tracks, the finishing took weeks instead of days to finish. “I’m not going to do that again!” he laughs.

While the mastering might’ve been tough, Lindstrøm’s tuneful compositions are truly conceptual pieces fleshed-out in the studio by his abilities as a multi-instrumentalist who plays all the instruments himself, first learning to play guitar and bass when he was 20, then moving on to drums and other instruments. “I’m really curious about being able to play all kinds of instruments. I’m not really good at any, but when you’re using it in the studio, you don’t really need [to be],” he admits.

Despite his perceived limitations, Lindstrøm sees other advantages to producing music in his D.I.Y. fashion—most notably when programming beats while having knowledge of the drums. But despite his golden ear for melody, there’s no set formula to making a track. Sometimes it starts with the rhythm; sometimes it starts with the melody. But the unifying thread is his use of chords—something he obsesses over. “It’s really important to me that there’s something more happening than a monotone drum break and a one-note bass in one key… It’s like after disco died, I guess the art of making disco arrangements, like strings and stuff like that, sort of vanished in a way. Most people making dance music now are DJs without musical training… Maybe it’s changing now,” he pontificates, citing the increase of DJs remixing indie bands, indie bands using computer plug-ins, and house and disco rhythms finding their way into contemporary rock music.

Combining his knowledge and musicianship with his affable self-effacing tendencies, perhaps its not surprising that Lindstrøm is most at home in the studio. “There’s this thing with DJs where you have to be abated with everything, and there’s so much really crap music! I know there’s a lot of DJs who are playing it and feel like it’s crap music—but it’s new music. I was never really happy with living that,” he explains candidly.

He also isn’t comfortable fronting a huge stage show. So when you see Lindstrøm tonight at Smart Bar, he’ll be performing live, with a keyboard and a laptop running Ableton Live sequencing software. “Well, the music is nice, but it’s not really interesting to watch it, so hey, let’s dance,” he imagines a fan saying at one of his performances. “I’m kind of happy with that in a way,” he chuckles yet again. “They want my music.”