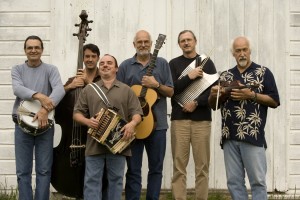 Michael Doucet, of the Grammy-award winning Cajun band BeauSoliel, has a lot on his plate—and not just Jambalaya. First, there’s his sacrosanct commitment to preserve Acadia’s native-tunes, then there’s the rip-roaring resolve to infuse both those traditional songs of his forbears and the originals with fresh reinterpretations—often two-parts fiddle to one-part accordion. Kick this pepper-pot up a notch and it bubbles over with blues, country-swing and jazz influences.

Doucet, frontman and musicologist, plays fiddle, guitar and sings in his native French. He once had an epiphany in high school that when the people of a culture perish, so does its musical legacy. To that end, Doucet and BeauSoliel have spent the last three decades perfecting Cajun music for future generations. Whether performing a stomp, reel or waltz, or playing a frottoir ( a rubboard used in Zydeco­—Cajun’s capricious cousin) or banjo, BeauSoliel brings world music to the homefront. If you don’t “die of happiness” during John Sebastian’s harp solo in “Little Darlin’” you just might two-step back to the bayou and rediscover your roots.

Prior to the Chicago concert, Doucet speaks about Cajun music and culture and the making of new release, “Alligator Purse.”

How would a traditional tune, like “Marie” from “Alligator Purse,” have been played live 100 years ago?

(Laughs) Just the same way. No, it probably would have been a ballad. When I was growing up there was this TV station that had a Cajun band—twin fiddles, steel guitar. They played “Marie.” It was just a nice waltz—we do it as a swamp pop.

We played the New Orleans Jazz Festival. Dylan played there, too—we both played the fest, but on different stages. We played at a little club and Dylan came out the next day. He said: “Can’t believe you played that old blues song—that’s really cool.” Well, Clifton Chenier would take old Chicago blues and New Orleans songs and make them Zydeco songs. We had been playing [these old songs] for thirty years but had never recorded them. We said, “Why not?” I didn’t really translate, but I added new words.

What did you learn by hearing the original Cajun tunes performed by those of your grandparents’ generation?

There were people like Dennis McGee—born before 1900—the first of our culture to commercially record between 1929-1936. Growing up in Louisiana—it’s a very musical place. It is so diverse. I would go twenty miles away and people would play something totally different. There were so many influences—jazz, blues, delta, country.

It took less than ten days to record “Alligator Purse” even with the addition of eight guest artists.

It took four days—then we mixed it in four more days. [The musicians] were pretty good—very relaxed. We’re not big on doing overdubs. There’s the feeling of “this is how we do it” live.

How is “Alligator Purse” different than your previous records?

The sound is different, the mix is different. We began with a twin fiddle song by Dennis McGhee (“1929”) and we end with an accordion played by Amedee Ardoin and in between we show the music and styles of southern Louisiana which we grew up with. The other influences were Cajun, Creole French and the New Orleans influence of Bobby Charles (“See You Later Alligator,” “Walking To New Orleans”) and Fats Domino. There’s the whole gamut of swing, ballads. It’s all reinterpreted. It’s a BeauSoliel record but it’s got a different slant to it. It’s difficult for me…it’s just an evolution of what we’ve been doing. We continue to grow and evolve as a group and basically we’re not trying to prove any points. We’re not trying to sound like somebody alive a hundred years ago. The music is so wrapped around our culture and our heritage—so many things have changed. The greatest thing is the decrease in the number of people speaking French…In 1970, there were about one million French-speaking [Louisianans], then the 2000 census showed less than 100,000. This is a barometer of what’s going on now.

Your ancestors were expelled from the Nova Scotia area and brought their music to Louisiana. Did this have an impact on the culture?

There are very few songs that talk about it. When a culture is uprooted, it’s very traumatic. Their armor was not military protection—it was French. But living in the isolated areas—that helped in our survival. You had to speak French. My culture grew up speaking French and English like it was no big deal. Our parents—in the twenties and thirties—were punished for speaking French in the playground. That really changed in the sixties. You can’t be nostalgic—you just have to go with it.