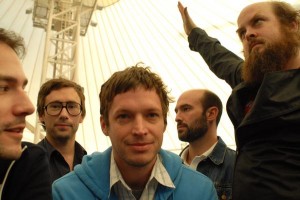 One of the most energetic acts you can catch today, New York’s Les Savy Fav produces a live sound that’s comparable to Fugazi forced through a meat grinder. Lead singer Tim Harrington you’ll have to see to believe, but these days its hard to find a frontman so readily willing to leave his blood, guts, piss and pain on the stage after a set. His charisma, or power, is a show on its own—while the band plays, I dare you to take your eyes off of him. The band’s tamed slightly in recent years, at least musically, focusing more on an indie-rock/art-punk sound, but the live show, Harrington’s presence, penetrating drums and thrashing, angry guitars, can make you lose your shit, if you’re willing. Jai Alai Savant opens tonight, and this band’s thunderous, inescapable live show—heavy on reverb and pure musical muscle—should make a fine lead-in to the mayhem. (Tom Lynch)