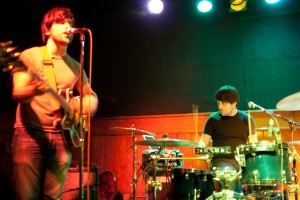 The Wiitala Brothers have been twin brothers for twenty-nine years and have been playing and creating music with one another for as long as either can remember. Their combined musical history includes a high school punk band…but whose doesn’t? Where Christopher and Trevor’s story becomes unique, though, is that by the time they were twenty-one years old, they made up half of a band called The Blamed, a Chicago-based unit that toured heavily in North America and Europe, and that was, at one point, signed to a fairly large independent record label, Tooth and Nail Records.

But as things go, after its first Tooth and Nail release, The Blamed soon met its end, and Christopher and Trevor found themselves again writing and recording together, and this time they kept it within the family as The Wiitala Brothers.

This February marks the five-year anniversary of their first show with that moniker, and although it’s been five years that may not have been as easy or exciting without the deep pockets of a record label or the occasional European tour, it’s been a half decade in which the brothers have both gotten married and, as they have matured, been writing some of their best music to date.

The Wiitala Brothers’ sound is, basically, straightforward, minimalist indie rock. The songs speak for themselves without a blanket of effects or over-saturation of supplemental sounds.

The band takes influences from all over the musical landscape. “We love Motown, not just for the fact that they created great pop music, but their production techniques were really innovative and we like to try to incorporate some of those ideas when we record,” Christopher says. He also cites artists like Bono and Bob Dylan for their ability to make songs that matter and that say something with substance. “As far as what we listen to affecting our songwriting, more than anything it’s getting us to think about writing songs centered around different instrumentation such as piano or stripping down an arrangement.”

The two are now hard at work on their debut full-length record, “Bad Blood.” The title is a play on Christopher’s successful battle, five years ago, with Hepatitis C and the fact that, as brothers, they share “bad blood.” The album is tentatively slated to be released independently. But, keeping things independent, without pressure from a label to produce and tour is liable to leave bands susceptible to taking a long time to finish something due to a lack of firm deadlines. “We definitely have set ourselves a deadline,” Christopher says. “Our hopes are [to be finished] by summer at the latest.”

Until then, while they continue to work on “Bad Blood,” Christopher and Trevor are playing songs from the upcoming release to audiences around Chicago. But, between them, they only have four hands, and there are multiple guitar parts, bass, drums and occasional keys prevalent in the songs. On stage, Christopher plays guitar and Trevor is behind the drums. “We basically have bass guitar and keyboards and additional guitar parts prerecorded in AudioDesk,” Christopher says.

Even though The Wiitala Brothers have always used sampling opposed to enlisting extra live musicians, the idea of sampling is becoming more and more frequently accepted with the success of bands like Animal Collective, a band that samples much of their instrumentation live, and Yeasayer, a band that has four members playing live instruments, but also uses sampling to supplement some of the sounds that they choose not to recreate on stage.

“When we first started playing shows we were nervous about how people would react because we use tracks, but we’ve never really gotten a poor response, as far as I know. It may be that people don’t care or they just don’t notice it,” Christopher says.

Opposed to some other bands that run rampant with sampling, The Wiitala Brothers are aware of it and try to be careful not to overstep with too much prerecorded material. “We definitely want to embrace technology but not rely on it. In our newer songs we’ve tried to keep the extra parts very minimal.”

To go along with the release of  “Bad Blood,” The Wiitala Brothers are also in the process of planning a tour for August and September that will take them, for the first time in a long time, back on the road.