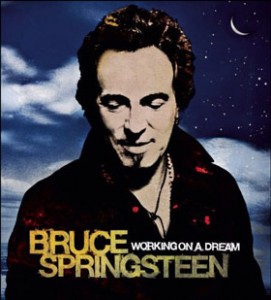 Rock icon Bruce Springsteen’s last year has been rather significant, with his musical contribution to “The Wrestler,” stumping for President Obama and a brand new record released this week. Despite lukewarm reviews to his new album, “Working on a Dream,” and some even calling song “Queen of the Supermarket” the worst he’s ever written, everyone seems to love The Boss. I mean, who doesn’t like The Boss? What kind of person are you?

Fresh off a Golden Globe win for the song he penned specifically for Darren Aronofsky’s film, Springsteen and the E Street Band are primed to play during halftime of Sunday’s Super Bowl, for a whopping twelve minutes. Springsteen, and the rest of the band, held a press conference yesterday as part of the Super Bowl media marathon, his first since 1987, apparently, which everyone is making a big deal out of for some reason I don’t entirely understand.

Anyway, The Boss referred to himself as “The Boss” a handful of times during the press conference, which sounded equally endearing and bizarre. When asked who decides what songs to play on tour, he replied, “Well, I’m The Boss. The Boss decides. The Boss decides what we play.” A few minutes later when it was discovered another band member’s microphone wasn’t working, he joked, “Only The Boss’ works.”

I couldn’t help but wonder if he does this all the time, not just with Stevie and Max and crew, but with strangers, friends, family. If he and his wife are deciding what to eat that night, does he get the final say?

Or deciding what movie to take in at the theater?

Who will win the Super Bowl?

Man, that would be so annoying. (Tom Lynch)

You can see The Boss refer to himself as such here. The band plays Sunday during halftime, and May 12 at the United Center.