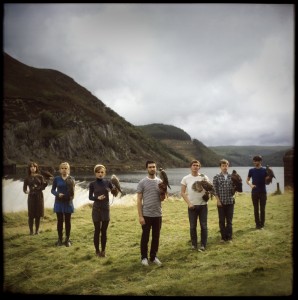 Welsh indie-pop septet Los Campesinos! has a bit of a reputation for being a juvenile, cheery band full of potty-mouth undergrad pranksters, and for pretty good reason. Nearly each Campesinos song pulses with teenage energy, bustling with violin riffs and catchy hysterics, and lyrics usually either dwell on deteriorating relationships, high-school-diary style (“I cherish with fondness the day before I met you”), or grammar-based metaphors (“And for each correctly used apostrophe, I could feel my heart sink inside my chest in front of me”). Song titles like “This is How You Spell. ‘HAHAHA, We Destroyed the Hopes and Dreams of a Generation of Faux-Romantics’” are in serious need of an editor. And that exclamation point at the end of the name—you know that’s trouble.

Yet you wouldn’t get the impression that these are snot-nosed brats when talking to Gareth Campesinos (the band has taken the same-last-name approach). One would think a MySpace smash and a rising indie player with two successful dance-pop records feels pretty optimistic about a long career and the reasonable pursuit of a little more popularity. And perhaps that’s true, but Gareth doesn’t give that impression. He says he and his cronies are quite cautious and realistic about this whole being-successful-long-term thing—an attitude that sounds more like “I think we should diversify our portfolio” than “I think we should cherry bomb the bathroom.”

“The reason that we enjoy being in Los Campesinos! so much, that we enjoy touring and releasing records, is because we’re aware of how fickle being in a band is, and how it will eventually end,” Gareth says. “I think being aware of that sense of mortality with the band helps us remain realistic.”

Gareth says that sense of mortality resides quite prominently on the band’s newest record, “We Are Beautiful, We Are Doomed,” an element you would never detect if you didn’t actually inspect the words. Twee-pop rarely accelerates to these speeds—a punk-rock tempo, its energy fueled with a plethora of instruments that seem to harmoniously screech with one another. Combine the speed with the themes, and it’s as if Los Campesinos! are sprinting towards death.

“Within the record, it’s the end of life itself, the end of what seems like a happy relationship,” Gareth says of the “death” angle on the record. “And equally the fact that we know that Los Campesinos! is a lot of fun and we enjoy it a lot, so it’s a beautiful thing for us. But we’ll break up eventually and the band will end, so that runs throughout the record.”

“I think a lot of people form bands with the intention of being this massive success and selling millions of records, being The Beatles or The Rolling Stones or something,” he continues. “That’s something we never intended to do and never expected to do; everything we’ve achieved and that we will achieve is far beyond our largest expectations for Los Campesinos!”

Having formed in 2006 and experienced almost immediate success, Gareth says he and his bandmates have “kind of been learning how to be a band as we’ve gone along,” so one could hypothetically say, “well, they’ll eventually learn to want more success.” But that’s probably not the case. Consider the music scene in the UK at the time of the band’s conception, and you’ll find a lot of image-first acts who primarily had that kind of fame and success in mind. Los Campesinos! formed in part to prove that those bands were one big crapfest.

“In the time of Los Campesinos! forming, UK was sort of completely overrun by post-Libertines, post-Strokes bands that weren’t doing anything exciting, just singing about being from London, regardless if they were from London or not,” he says. “It was all skinny jeans and trendy haircuts and leather jackets. And that wasn’t something we couldn’t empathize with and didn’t want to be a part of.”

With no emotional connection to British music, the band looked to American acts (Pavement, Yo La Tengo, Sonic Youth) for inspiration, and after putting together a few tunes they put them up on MySpace. The ensuing popularity was a total shock to Gareth, who insists the band never imagined the songs would take off. Gareth says he stopped checking to see how many friends the band has on the site (as of February 2, 32,563) because he dismissed the idea of the band being that popular as “ludicrous.”

“It never did seem like a marketing thing to us,” Gareth says. “MySpace is a really great tool for any band, but we never wanted or intended to use it like that. You see some bands on MySpace who are just sending out bulletins all day every day and asking people to comment on their photos and to blog about them and stuff… I think if people want to write about you or want to support you, they will. And we were just very lucky that enough people did.”