by Tomnewcity
February 3, 2009Filed under: 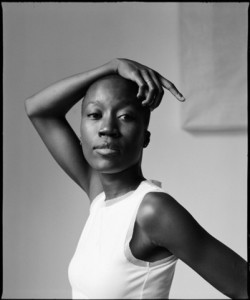 The daughter of diplomats, Malian-born Rokia Traoré was exposed to various cultures as she grew up, and when she took the plunge into playing professionally, she found fierce resistance both from her parents as well as from other musicians in her native country—after all, she was a member of a noble caste that usually does not venture into the performing arts. But she had help from Ali Farka Touré, who mentored her career and  worked closely with her until his untimely passing in 2006. “He was one of the first musicians in Mali who accepted to work with me. When I started, I was one of these musicians who didn’t have any [previous] career,” she says. “I didn’t start with an orchestra, or play in weddings. I came from a particular area with a very particular background, and that was unusual for people to accept me as a professional. But he treated me like any other musician.” For her new disc, “Tchamantché” (Nonesuch), Traoré decided to go with a change of pace. Out are many of the traditional African instruments that were present on her previous discs. Instead, she sings and plays her old Gretsch electric guitar (a model favored by George Harrison and Chet Atkins, among others). Sure, there is still the n’goni (lute) and some percussion, but that is all. “After several months of reflection I decided to try and take a risk do something more ‘up’,” she says. “Of course the people I used to work with weren’t the same anymore. The album came out in France in May, and it is really close to what I imagined.” The disc still sounds African in essence—but the music is also influenced by American blues, European folk music and other sounds—including a very personal rendition of George and Ira Gershwin’s “The Man I Love,” a tune that was a hit for Billie Holiday, Peggy Lee and many other jazz-era divas. (Ernest Barteldes)