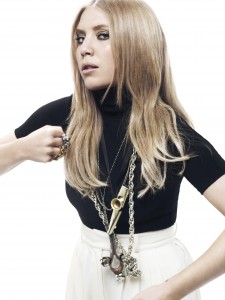 Swedish indie chanteuse Lykke Li’s debut album might seem profoundly familiar in its musical formula, but there are contradictions that set “Youth Novels” apart from being just another pop-centric indie-fluff flash-in-the-pan.

Recorded over a period of ten months with Bjorn Yttling (the Bjorn in Sweden’s last big pop export Peter Bjorn and John), “Youth Novels” weaves a tuneful story, with Lykke Li’s breathy, whispering and cooing voice the perfect complement to Yttling’s sparsely eclectic hooks and efficiently effective rhythms. Released in Sweden in January of last year, “Youth Novels” finally saw a Stateside release in August of 2008, and promptly shot to the top of year-end lists for Spin, Rolling Stone, Blender, Stereogum and even Entertainment Weekly.

“My voice is not the important thing—it’s what I do with it,” says the 22-year-old, born Li Lykke Timotej Zachrisson, already defending her kittenish voice from her kitchen in Stockholm, Sweden. “I had to learn to get past my voice, you know, because it’s your intentions that count. When I listen to Nina Simone, I have a feeling she doesn’t really care about her voice either, she just lets her heart speak, and that’s what people hear. I kind of believe in that style of singing. Just open your mouth and let your heart speak instead of your vocal chords.”

It’s easy to agree with her when she speaks in her excited, rapid-fire voice—animated, accented, youthful and defiant, adorably eschewing sentence structure, pausing only for thought. But the contradictions on “Youth Novels” run past the Scandinavian despair in her lyrics and her voice. Also on display are contradictory musical influences, from the electro-tinged grind of “Complaint Department,” to the simple dance-evoking grooves of “Dance, Dance, Dance,” to the backwards-leaning echo of early R&B with “My Love” and the “Working in a Coal Mine”-gloaming “I’m Good, I’m Gone” (anachronistically outfitted with a good dose of 1980s-era handclaps).

“[The contradictions] are who I am as a person. I went to this person who was reading my palm, and she said ‘You are full of one million positions, and you can’t make up your mind, and you have 10,000 faces,’ and that’s who I really am.”

And from soul-baring confessionals to making people dance, Lykke Li’s been known to throw out hip-hop covers in her performances, and you can find video of her covering Rick Ross’ “Hustlin’” and A Tribe Called Quest’s “Can I Kick It?” online. So anything special planned for her latest trip to Chicago?

“If I was planning any surprises I would not tell them… [she pauses before singing playfully] it would not be a surprise!” (Duke Shin)