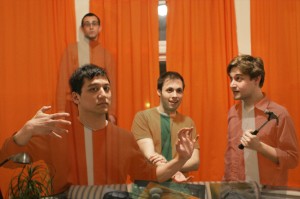 In August of 2006, when Matt Collander, Ben Sachs and P.J. Macklin were looking to make their three-piece band into a four-piece, they took to the invariably iffy Craigslist listings of musicians. They were very specific though. The right candidate needed to be into the bands that they were into as well—Sonic Youth, Pavement and Ween among others.

When Phil Bertulfo, a native of Los Angeles, and a then recent transplant to his sister’s house in the suburbs, logged onto Craigslist to look for a band that was seeking a member, he was specific in his criteria as well. Matt, Ben and P.J.’s was the only listing that fit his criteria. He was the first to audition for the available spot. “Within about a minute, we knew that he was the guy,” says Macklin. What followed was Percolator.

Since then, the band has been working hard, and that’s no understatement. Try four EPs, one LP and another full-length double-album, in the workings. “We had to cut ourselves off because three songwriters were all writing material,” says Macklin, “so we cut it off at forty songs, and of that, I think we’re going to try to do twenty or thirty.”

The band has recorded its quirky blend of indie pop-rock that’s infused with elements that resemble sounds of decades past—Talking Heads, They Might Be Giants—in various venues from practice spaces to the illustrious confines of Studio A at Electrical Audio, complete with its bass traps under the floors, completely soundproof drum (dead) rooms, jump suits and homemade furniture.

“It felt really strange to be there,” says Bertulfo, “like we had been let in on some big secret.” “The whole time was just like, literally, a kid-in-the-candy-store kind of thing,” adds Macklin. As amazing the experience was for the band, though, the number of songs that Percolator records doesn’t always allow them the opportunity to block off time for every session at Electrical Audio. So, instead, they prefer to work at their practice space, on their own time, a choice that a lot of bands are making with the affordability of quality technology that’s available.

“To me, if the recordings are a little scratchy and a little shitty because we’re recording at home, but all of the ideas are there, and it still sounds good, I’ll deal with a little bit of shit,” says Bertulfo.

But even while making small sacrifices to gain the ability to record and release at their own pace, which is nothing short of fast, the quality of the home recordings is fairly close to being on par with that of the recordings that came from the Electrical Audio sessions.

Percolator is also interested in the public hearing all of the music more than they are in profiting off of it at this point. As well as streaming samplings from three of its four EPs, the band’s 2008 LP, “Man Is Not A Bird,” is available for free download in entirety on its Web site, percolatormusic.com.

[…] Mr. Todd Miller of New City was kind enough to give me and PJ a call Monday night to interview us for New City. Check out the supple and delicious fruits of his labor right here. […]