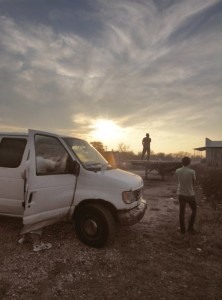 Blueberry Fist is relatively new on the scene, having only been together with the current five-man lineup since last August, but by the sound of the band’s self-titled debut EP, you wouldn’t know it. They sound like they’ve been playing together for some time. This band isn’t a band that is trying to find its sound, but a band that has already found it.

As a listener, my ears naturally tend to gravitate toward the rhythm section of a band. I constantly find myself judging a band on the cohesiveness of the drums and the bass. There are drummers and bass players who play the songs separate from one another, focusing on their parts, not whether they are accurately blending with the other, and there are others who make the task of carrying the bottom section of a song or band a combined effort. The rhythm section in Blueberry Fist has figured out how to play together, and this, to me, is an invaluable accomplishment.

One of Blueberry Fist’s two guitarists, Ricky Adame, describes the band as having “an energetic, poppy sound.”  They’ve got energy down, and there are certainly hooks that bring me back for a second listen. “We try to keep it fun and interesting lyrically as well,” adds Adame. The band’s lyrics span different subject matter from historical protests and riots to Sly Stone.

Add sporadic, distorted tapping guitars to the layer of bass and drums as well as vocals that do a lot for the band’s pop-awareness, and what you’re left with are the strong songs that are coming from the year-old quintet.

After a short tour experience that left them in Texas, in a bind, forced to sell their broken-down van for $100 and rent another for $150 to make the trip home, the band is regrouping in Chicago this winter and planning another two-to-three week jaunt for the summer. The band’s EP is available for free download via http://cllct.com/release/blueberryfist. (Todd Miller)