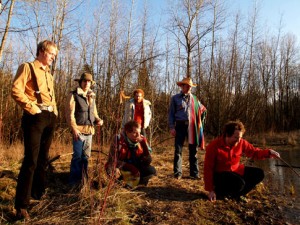 Maybe hipsters and elitists are the culprit, but at some point the element of “cool” in our beloved rock ‘n’ roll became corrupted, and all those deified rock stars of the sixties and seventies that almost innocently relished playing the role of “badass” evolved into the alt-rock/indie-era musician, a clan whose most rebellious tactic is to ironically grow a gristly, woodsman beard. That’s why Portland’s folk-rock act Blitzen Trapper is a refreshing anomaly—the swagger is back! These guys have the balls to drive a riff into your skull, and then pull you out of the shootout for a couple of campfire-pondering ballads reminiscent of Crosby, Stills and Nash. If the band’s latest record, “Furr,” sounds like the forgotten soundtrack to “Unforgiven,” it’s for good reason. A constant stream of western references, stuff like “I’m a moon-walking cowboy” and “I stole me a horse, and I rode it around/ Till the sheriff pulled me in and sat me down,” combined with steady stream of heavenly steel guitar counter-riffs point to a band dreaming to be as cold-blooded awesome as Clint Eastwood. But they’re not cowboys; they’re rock stars, and until the Vampire Weekends of the world trade the cardigans for pistols, or until Sufjan Stevens releases a “New Mexico” album, those two things may never be analogous again. (Andy Seifert)