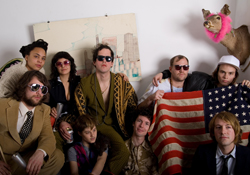 Bands that understand an identity can extend farther than a few guitar riffs or an Afrobeat tend to have a helluva lot more fun with their existential self. Chicago dance-punk collective Mahjongg could be your stereotypical ten-piece tribal-based polyrhythmic act (as prevalent as Peruvian flute bands these days), but these hippie/hipster hybrids go for the jugular with one idiosyncratically crafted backstory. The band calls themselves the Mahjongg “sect,” who are sent by the God “Kontpab” (also the name of the band’s sophomore album) to free us mindless humanoids from “The Grid” and to teach us how to step into an improvisational, nirvana-like universe known as “The Sphere.” Now, that may sound like marijuana-inspired poppycock, but when you’re in the midst of some sort of trance-like jitterbug, and the band’s discreetly hidden details—the distant, trashcan-like percussion and the omnipotent, “1984”-inspired vocals/subliminal messages—begin to form behind the menacing, brain-rattling arrangements, then you can very hazily start to make out The Grid that imprisons you within your Earth-sized cell. Then again, maybe it’s the drugs talking. (Andy Seifert)