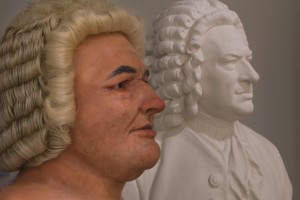 Back in 1977, Lewis Thomas of the Sloan-Kettering Institute was asked by astronomer Carl Sagan what message he thought should be sent to other civilizations out in space to best represent our human race. “I would send them the complete works of Johann Sebastian Bach,” Thomas replied. He then sighed and added, “But that would be boasting.” The music of Bach is indeed contained on gold-plated discs that were included on each of the Voyager I and II spacecrafts that are currently heading way out from our solar system, hoping to eventually find their way to extra-terrestrial civilizations. Bach himself would be perplexed by this as he was just doing what members of his family had been doing for generations—making music—which in his day included composing it to order as needed. Whatever “art for art’s sake” discussions we may have in our time, Bach never composed without a fee, or at least without a very practical purpose in mind (obtaining a better job, training his children, etc.). Bach did not live to compose, he composed to live. Which is why Bach’s “Mass in b minor” is such an anomaly. What was such a devout Lutheran doing writing a Latin setting of the Roman Catholic Mass in the first place? We’ll never know for sure, but it stands as the greatest Mass setting ever put to music and a work which many consider a cornerstone of the best of what Western civilization has to offer. The great choral masterworks of Bach were once the signature music of Music of the Baroque and the reason that the group was founded, but as the ensemble has moved away from Baroque music and further into the Classical era of Mozart and Haydn, performances of Bach have become less frequent. Still, when MOB does perform Bach, as it did last year with the “St. Matthew Passion” or the “St. John Passion” of a few seasons back, the results are no less glorious than the former days of the group, even if a single catch-all downtown concert hall is no substitute for the resonance and ambience of the carefully chosen neighborhood churches that were once the group’s sole performing venues. With concert works this isn’t as big of a deal, but when it comes to sacred choral works, their meaning and effectiveness is somewhat stunted in such a sterile and secular environment which is why the sole church performance is in such high demand while there are plenty of tickets available for the Harris Theater performance. You would think that MOB would get the idea and start offering at least one other season program with a sacred theme besides its popular Christmas concerts back in neighborhood churches. Meanwhile, savor these performances, wherever you can catch them. (Dennis Polkow)