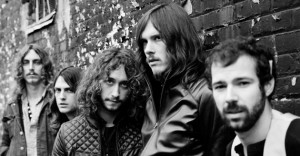 If your band is a throwback to a time when rock ‘n’ roll was full of innuendos for wild, unbridled sex, when bare-chested guitar players could suck down two cigarettes in the time it took to pick an epic, seven-minute guitar solo, when a good-natured thrashing of a hotel room marked an appropriate, understandable end to one insane weekend in Cleveland, then it’d be historically apropos for your band to indulge in, say, licking toads once in a while, right?

That may be the off-stage expectations for New Jersey sleazy blues-rock quintet The Parlor Mob, who proudly carried the torch of Zeppelin, Floyd and Sabbath in a region shrouded by the absolute darkness of emo and crappy middle-aged tribute bands. The way guitarist Paul Ritchie tells it, eastern New Jersey needed a band like The Parlor Mob, a band with hot licks and frenzied drumming interludes, featuring dudes with flowing, Roger Daltrey-esque locks of hair (and complemented by a guy with John Entwistle’s beard). Music was getting lame, and it needed a kick in the pants.

“We just wanted to do something different,” Ritchie says. “Just naturally we were playing crazy progressive rock, and it eventually matured to what we play now. Where we live there’s a lot of cover bands. And besides that, all the people our age were playing indie rock and emo, and we wanted to play that sleazy blues-rock, that prog-rock jam. I think that’s how we got people’s attention, and started a fan base. We’ve got a lot of bluesy guys around where we live, but it’s all kinda cheesy blues, not real, from-the-heart kind of stuff. It’s like covers or bad guitar tones. I’m not dissing Stevie Ray Vaughn, but it’s all that kinda style, which is not my personal taste.”

As Ritchie states, this band rejects any notion of a “cheesy” blues-rock band, and the group’s debut LP, “And You Were a Crow,” exemplifies that notion. There are no wimpy, lukewarm solos; Ritchie, who wields a Reissue ’72 Fender Telecaster like it was a gift from Yardbirds-era Jimmy Page, shares the soloing with guitarist Dave Rosen, and each compresses their style into simple, overdrive-stuffed freak-outs. There are no uninspired, indiscernible lead vocals; lead singer Mark Melicia’s obvious Robert Plant impression manages to supply fresh blood into the art of a high-pitched front man that indistinctly sounds like the devil. Clearly, music like this implies that sodomy, public drunkenness and sinful tomfoolery must be back, too. Right?

“No trashing hotel rooms because we pay for them ourselves, we can’t afford to,” Ritchie says, implying that being in a band is, after all, an occupation. “We do our fair share of partying, but we do so much work at times. We’ll party at the end of a run. We’ll do like five shows in a row, and the last day we’ll have two days off or something. Then we’ll get to do that, but besides that we take care of ourselves pretty well. We’ll have beers and stuff, but if you get trashed then you got to wake up four hours later and drive in the van for like eight hours. It sucks.”

Dissapointed? (I guess if we want public debauchery, we still have Amy Winehouse.) Ritchie even hinted that the demographics of The Parlor Mob’s ever-growing audience suggest the guys actually have to think about being role models. This doesn’t mean the fellas in The Parlor Mob aren’t aware of public persona or expectations. On the contrary—this is a band who wants to control its own narrative to make sure the story revolves around the music.

“It’s so hard playing rock ‘n’ roll, because you want to maintain a level of seriousness so that you don’t come across as being cheesy,” Ritchie says. “You don’t want to be that band on the cover of a magazine, slamming beers and throwing our fists up in the air. We do do that when we get drunk, but it’s not how we want to be portrayed to the public. We want younger people to dig our music; we don’t want them to see us with beers in our hands on the cover of a magazine. We wanna be responsible for the way we portray ourselves to the public.

“We do tons of that shit,” Ritchie continues. “But we don’t want that to be part of our story as a band.”