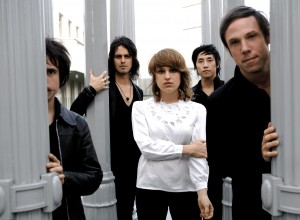 The Airborne Toxic Event lead singer Mikel Jollett’s voice sounds bizarrely similar to Eric Bachmann’s creaky, throat-clogged delivery from his Archers of Loaf days. At least on “Wishing Well,” the opening song from the band’s debut 2008 self-titled full-length. In other places Jollett’s voice shape-shifts from an Ian Curtis-like baritone to a eyeliner-donning emo-ite to something of a wad of Julian Casablancas and, eh, Mike Ness. Totally weird, and kind of annoying, yet transfixing in the way it makes you want to hear what comes next. The band’s name of course is a blatant reference to Don DeLillo’s modern classic “White Noise,” which one could see inspiring more frowns than nods of recognition, because not many people like a pack of smarty-pants indie-rockers, but nobody likes a pack of smarty-pants indie-rockers from Los Angeles.

Thing is, while all of the elements combined should be a recipe for cataclysmic disaster—or at least something entirely forgettable—The Airborne Toxic Event has a spark of natural youthfulness and heart-on-sleeve desperation, the kind that only comes with an undeniable fearlessness. Fearless to say what you mean, to sound like your heroes, to lay it all out there and fuck-all if you can’t get into it. Pitchfork was offended by the band’s blunt nature, awarded the record a 1.6 rating and unfairly went for the jugular, essentially branding the group a rip-off act. The Airborne Toxic Event has survived the attack—jangly guitars matched with arcing keyboards and Jollett’s adaptable voice and thinly veiled lyrics comprise the record’s ten well-rounded rock songs. Fast and quick and hard and heavy, the thing is over before you know it. “Sometime Around Midnight,” which starts with a delayed guitar lead pretty enough to be of Explosions in the Sky’s catalogue, was named the alternative song of 2008 by iTunes—the band’s played Letterman and Conan, too—and both of tonight’s sets at Schubas are sold out. Going somewhere, indeed, no doubt helped by the blood-and-guts live shows.

So blood-and-guts are the performances that on the morning Jollett and I are to speak, he’s been forbidden by his doctor, having come down with a case of laryngitis. “It’s the first time we’ve ever had to reschedule shows,” says guitarist Steven Chen. “The doctor seems to think he’ll recover within two days or so. But he can’t talk. He’s like, ‘I’ve never felt this way before.’ We’ve had to alter the sets [recently], so he could sing quietly, lower.”

Thus the band’s back in LA recuperating, a rest you can’t say is undeserved. After touring extensively in 2008 in support of the record—which included a “30 Shows in 30 Days” stint in the UK this past November—and having much of 2009 scheduled away, The Airborne Toxic Event needs a bit of downtime, even if it’s only a few days.

“I feel like, ever since the album came out, we’ve been touring nonstop,” Chen says. “I could look back and see some breaks, but only like a week or two. It’s been crazy. You have to readjust the idea of what it’s like to travel. You’re living on the road, you need to make sure you’re eating well. On nights you spend in your hometown you [want to] stay in as much as you can.” People are like, ‘So, did you enjoy Portland?’ And it’s like, ‘Yeah, it was dark, there was a stage, there was beer, people screaming. It was just like Seattle and San Francisco.’”

Not all of it was so torturous, however. “We did work in some extra time while we were in Paris,” Chen says. “Most of us had never been there, so we just stayed there for the weekend because, I mean, it’s Paris.”

The album’s been settling for a while now, you’d think playing the same songs night after night would make a musician anxious to write and perform new songs. “We definitely are feeling the impulse,” Chen says. “Everyone in the band’s minds are racing—everyone’s working on Garage Band on their computers in the van. We found we have no time to rehearse, but we’ve been working on new stuff. We steal rehearsals at soundchecks. Ideally, we need the downtime [to work on new material], but there’s so much going on, it makes it more difficult. It’s a good problem, you can’t really complain. We’re really grateful. We know these things don’t happen easily. We’re trying to do as much as we can without killing ourselves with laryngitis.”

1 Comment
Inline Feedbacks
View all comments
Toxic History, Chapter 23: All At Once | This Is Nowhere