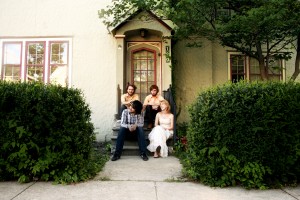 On the outskirts of DeKalb, there is a 30,000-square-foot warehouse where Jim Cicero of Light Pollution lives by himself. Cicero and Matt Evertt, the band’s drummer, originally leased the warehouse, but Evertt has since moved out and only Cicero remains.

Light Pollution also uses the space to rehearse and record. “There are separated rooms with vents that create amazing natural reverb and other weird stuff,” says Cicero. While he is unsure of the benefit, if any, that living alone in a space so big has had on his personal life, he is confident that it has been positive for the band. “I think it’s done everything good for the band, having everything set up so we can spend as much time on something as we need.”

Light Pollution, a band that formed when Cicero moved to DeKalb to attend Northern Illinois University, started as a folk-rock ensemble, but has moved into a more calculated, more vocal-oriented group, not necessarily experimental or ambient, but according to Cicero, a sound that is in the vein of Wilco’s “Yankee Hotel Foxtrot.” “There are a lot of layers and noise behind the songs,” says Cicero. “I think the biggest transition is to come from being used to having this formula and now just being able to do whatever kind of freely.”

In the folk-rock days, the band was outfitted with an accordion and horns, and now, there are still violas and horns and other instruments in addition to the traditional rock line-up of guitars and drums, but the difference is that the band only uses the extra sounds when they feel that they will serve a purpose. “There are songs where if strings don’t fit, we’re not going to put them in there,” says Cicero. “It kind of just depends on the individual song. If we think something fits and we can play it, we’ll do it.”

Light Pollution is one of my favorite local bands lately. Their sound will not stay confined to that warehouse in DeKalb. The songs are well crafted and stay true to the band’s creative integrity while keeping the ability to reach mainstream pop success. Carried by vocals and supplemented by interesting instrumental arrangements, Light Pollution’s sound is extremely enjoyable.

On Friday, Light Pollution will play as a part of the Amplify New Music Series at Schubas, a monthly showcase of new music. But even though they are still first being noticed by some, Light Pollution has been paying dues since 2005 with shows in DeKalb and Chicago and in various cities around the U.S.

The band is currently close to finishing another album, the follow-up to its self-titled, independently released EP. “It’s very, very close to being done, probably another week of tracking,” says Cicero. “After that, we’ll see what happens.” The band has a few short tours in the works as well as some festival dates this spring and summer. (Todd Miller)