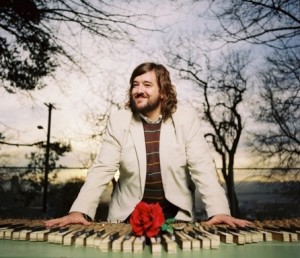 David Terry, the driving force and lead singer behind Seattle-based act Aqueduct, is one of those one-man shows, the type who plans each note, each beat, each ounce of reverb with meticulous conception. Some use that power to create their defining, operatic masterworks, while others indulge in those guilty pleasures that full bands would never consent to creating. But Terry’s Aqueduct project has proven to be an idiosyncratic and awkward band, an uneven piece in indie rock’s puzzle. With the conventional guitar, bass, drum loop and synth gear set-up and with Terry sticking to a traditional verse-chorus-bridge structure, Aqueduct still always skirts away from any genre. There’s really no way to label the band other than “pop, sort of.” Kind of Beulah/Ben Folds piano-rock (but also guitar-driven), kind of early Shins lo-fi sunny-pop (except oddly glum), Aqueduct defies any solid, truly apt comparisons, frustrating lazy music critics to no end. Still, it’s catchy and accessible; Terry knows when to throw in a weird flute or xylophone part and likewise knows when and how to swear with maximum awesomeness. And effective, well-placed profanity is the foundation of great pop music. (Andy Seifert)