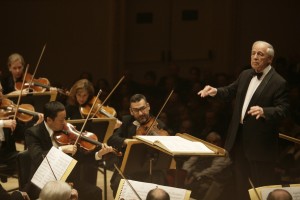 Even though Pierre Boulez turns 84 next month, the Chicago Symphony has already announced grandiose plans for his eighty-fifth birthday next year, where his work as a composer, conductor and champion of new music will be noted with a month-long celebration. Of course, at such an age, anything is possible—the CSO had grand plans for the eighty-fifth birthday of Sir Georg Solti in the fall of 1997 until he died suddenly a month before—but Boulez is such a devout atheist and is in such great health that we could well be celebrating his ninetieth birthday here, and even well beyond. After all, his friend and fellow composer Elliott Carter, whose piece “Réflexions”—written for Boulez’s eightieth birthday four years ago and which attempts to spell out Boulez’s name musically—will be performed on these concerts, is still thriving at 100. Still, it is ironic that longtime enfant terrible Boulez, who once criticized Igor Stravinsky for living too long and who chastised the composer publicly for writing music late in life that was a “dead end,” continues to perform Stravinsky’s music at a similarly advanced stage of his own life. Two Stravinsky pieces will be represented on this first week of a two-week Boulez/CSO residency, the “Symphony in Three Movements” and “Four Studies for Orchestra,” along with two pieces by Edgard Varèse long associated with Boulez: the landmark exploration of percussion sonorities “Ionisation” and the radical piece that Varèse wrote upon his arrival in the States nearly a century ago, “Amériques,” both of which remain so far ahead of their time that we have yet to catch up. (Dennis Polkow)