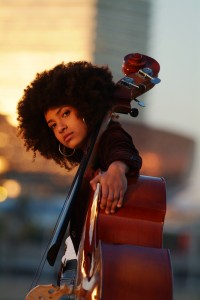 Among the young breakout voices to emerge in the national jazz scene of late is this Oregon-born singer and acoustic bass player, who at 23 years of age has already become a professor at her alma mater, Boston’s Berklee College of Music. In addition to that, she has appeared and recorded with the likes of veterans like Joe Lovano, Pat Metheny (who has mentored her career from the start) and many others. On her self-titled major-label debut, Spalding demonstrates that she is an artist in development who keeps an open mind, avoiding the trappings of niche genres. She skillfully takes on a diverse array of styles ranging from samba, Latin, hard-driving jazz and R&B. Such eclecticism probably would not work in less confident hands, but she revels in these multiple directions without sounding pretentious at any given time. Spalding is a talented singer, bassist and tunesmith who is willing to take risks and explore different influences as a tool to explore her creativity. She has undeniable talent that might quickly include her among names like Stanley Clarke and Marcus Miller—just wait and see. (Ernest Barteldes)