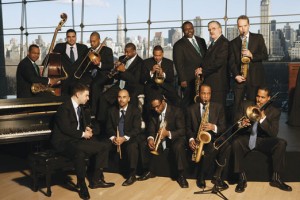 On the current tour of The Jazz at Lincoln Center Orchestra, the sixteen-piece band is focusing on the seventieth anniversary of the original Blue Note records (no relation to the jazz club of the same name), the New York-based label founded by Alfred Lion and Max Margulis in 1939 that became seminal for musicians like Thelonious Monk, John Coltrane and Herbie Hancock, who all cut albums for it during their fruitful careers. In addition to this project, they have also been working on a lot of material generated by the band members themselves. “We have a really large repertoire of music,” explains trumpeter Marcus Printup.“For the past year, Wynton has been featuring different arrangements from the cats in the band, and we’re starting to expand our own book as well as music from band leaders like Stan Kenton, Count Basie and the like.” Printup doesn’t seem intimidated by playing his horn next to the band’s famous director—they have been playing together for well over a decade, and Marsalis’ professionalism helps to keep things in the right place. “He actually leans on us for a lot of things,” explains Printup. “There’s a solo that is in his part that he tells us that I should play, then he’ll give it to me because he says, ‘this is more of your style, you can do that better than I can.’ We are one style of trumpet section that he doesn’t stick out, and he sees himself as one of us, and that makes it easier to work for—or with—him.” (Ernest Barteldes)