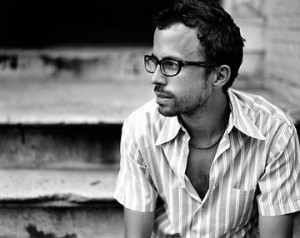 Best known for his work as a songwriter and guitarist with Norah Jones (he penned several songs for her first two albums, including the Grammy Award-winning “Don’t Know Why”), New York-born Jesse Harris has had a long career as a singer-songwriter in his own right. In the meantime, he has also worked as a producer and touring sideman for the likes of Sasha Dobson, Jonathan Harris and many others. If that weren’t enough to keep him out of mischief, he also wrote the score for the soundtrack of the Ethan Hawke vehicle “The Hottest State.” Harris is currently on tour promoting his upcoming disc, “Watching The Sky” (Mercer Street), a record that is heavily influenced by Brazilian music—an obsession he has lived with for the last few years. “I’ve been listening to Brazilian music since I was a kid—my dad introduced me to the album that Stan Getz did with Jobim and Joao Gilberto [the iconic “Getz/Gilberto,” released in 1965] and the records that Herbie Mann did—my dad was attracted to Brazilian jazz-fusion,” he says over the phone from New York. “Later on I discovered Gilberto Gil from friends when I was pretty young and from then here and there I would listen to things but it was really when I went to Brazil in 2002/2003 that I bought a bunch of records and really got into it, and later I discovered early Jorge Ben and Gilberto Gil records, and Gal Costa and everything like that and it really became an addiction—every chance I got I’d buy Brazilian records.” For his Chicago stop in support of Joshua Radin (he also plays in Radin’s band), he keeps things pretty low-key, performing backed solely by his six-string banjo and a percussionist—a format he developed as he hit the road. “I was going to go solo, but the record company said that it would be better to have a percussionist,” he says. “At first I was doing acoustic guitar and percussion, and would play banjo on a few songs, and every time I played banjo I had a lot of fun, and then every time I picked up the guitar I got bummed out, and eventually I started playing only banjo.” (Ernest Barteldes)