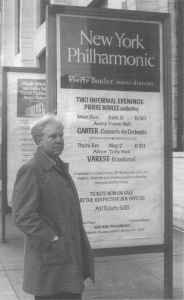 The relationship between Pierre Boulez and Elliott Carter goes back over fifty years, when both were already legendary avant-garde composers on opposite sides of the pond. As Boulez began his performing career—largely due to the fact that his music was so demanding that most performers didn’t know what to make of it, let alone how to perform it—Carter’s music was right there being performed alongside of Boulez, particularly during Boulez’ controversial music directorship of the New York Philharmonic. Both had rejected contemporary attempts to continue down well-traveled roads and both made developing their own, unique musical language and sound a top priority. How remarkable that Carter, who turned 100 on December 11 and whose centennial is being celebrated worldwide, and Boulez, who turns 84 on March 26, are both still plugging away and neither has given an inch in terms of their groundbreaking spirit of adventure. Of the various Carter tributes, none is likely to be more significant than this rare performance by Boulez and members of the Chicago Symphony of Carter’s 1976 bicentennial song cycle “A Mirror on Which to Dwell” for soprano (Jo Ellen Miller) and chamber orchestra based on poems of Elizabeth Bishop. Carter’s fascination with Bishop’s poetry about nature, love and isolation was in part due to what he described at the time as “a clear verbal coherence as well as an imaginative use of syllabic sounds that suggest the singing voice” and their “almost always…secondary layer of meaning, sometimes ironic, sometimes passionate, that gives a special ambiance, often contradictory, to what the words say.” The concert also features works by younger protégées of Boulez: Nigerian born Swiss composer Hanspeter Kyburz’s “Réseaux” for flute, oboe, violin, cello, piano and harp and French composer Bruno Mantovani’s “Streets,” the timbres of which are meant to evoke the crowded streets of New York City. (Dennis Polkow)