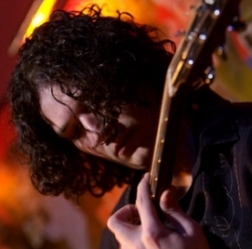 Local underground music wonders The Andreas Kapsalis Trio’s second album, “Original Scores,” takes its haunting melodic cues from experience composing film scores, including the 2006 Sundance premiere “Black Gold.” Toss this up with a heady dose of flamenco-influenced guitar, blues, African and Arab influence, the eight-finger virtuosity of Kapsalis and two jazz percussionists and you’ve got the magic formula. The culprit is Kapsalis’ extraordinary guitar-playing technique: an accident at the age of 18 caused him to learn to play admirably with one hand, which explains why watching him live is comparable to a circus act. His hands fly over the instrument in wild abandon, often using one hand to tap against the instrument while the other (or sometimes both) does a mad dance on the stem strings. Watching him perform a cover of Pink Floyd’s “Money” makes you wonder why anyone would settle for playing guitar in a conventional manner. (Marla Seidell)