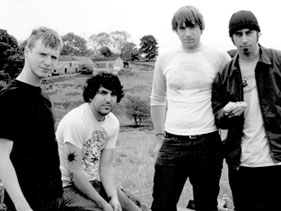 One of about a million of emo bands to come out of Lawrence, Kansas, The Appleseed Cast holds a special, nostalgic place in my heart. The post-rock act happened to be the opening band at my second-ever concert (not counting the Three Dog Night show my parents took me to), and these emotional shoegazers had a profound, once-in-a-lifetime effect on little 16-year-old me: I fell asleep. A twenty-minute power nap to be accurate, which never happened before and hasn’t since. In retrospect, I still agree with my young self’s sleepy “thumbs down” assessment, but I also wish I had given the band another shot. Few bands can so serenely layer a wall of guitars or build up a song like it’s the musical Tower of Babel. Superior production techniques and eloquent arrangements helped The Appleseed Cast become a tighter, polished version of a Sunny Day Real Estate jam session. At its best, the band can make beautiful stuff … yet it still bores the hell out of me. For every post-rock/quasi-pop gem, The Appleseed Cast insists on meddling around in a slowly developing, mid-tempo world for far too long, a trend that continues on its newest effort, “Sagarmatha.” Occasionally enthralling, mostly boring, The Appleseed Cast is for people with more patience than me. (Andy Seifert)