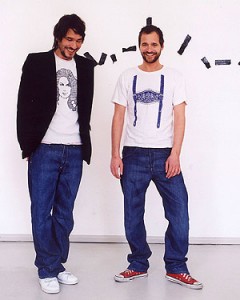 Berlin-based Brothers Alexander (Ali) and Sebastian (Basti) Schwarz, better known as the popular German house duo Tiefschwarz, have been DJing for nearly fifteen years. They began producing music around 1997 alongside their silent partner Peter Hoff, blending techno, house and electro-house sensibilities. Tiefschwarz has released records for Classic, International Deejay Gigolo Records and Cocoon Recordings, and has remixed such varied artists as Underworld, Phuture, Fischerspooner, Madonna and Missy Elliot. The brothers have owned their own label Souvenir since 2006. Spy Bar will host the dynamic duo from Stuttgart this Friday (one of the best bookings at the club in months), so Chicago will get a chance to experience their DJ set in an intimate space with top-notch sound. Tiefschwarz will deliver a party-rocking set with infectious energy behind the decks, dropping deep and moody tech-house tracks as well as playful synth-driven bangers. (Elly Rifkin)