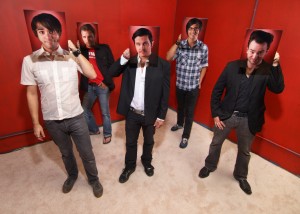 The journey that finally brought the members of The Glide to where they are now was one that saw them first as a cover band playing songs by Billy Idol, Devo and Men Without Hats. After high school, and realizing a desire to make original music, the band took some time off and regrouped. Its next incarnation is described by keyboardist James Little as “kind of Interpoly, Arcade Fireish music.” But according to Little, that didn’t seem to be working either. “We had always really wanted to do kind of a dance-electronic thing, but it wasn’t really coming out as dancey or electronic as we really wanted.” Amidst talk of members calling it quits, singer and guitarist Darius Laskas kept at it and he came back with a sound that the band was quickly drawn to, and the songs that Laskas wrote during that four-month period are songs that the band is still playing four years later.

The band’s sound is closer to The Faint than to Arcade Fire these days. The drums are becoming more and more electric with acoustic toms being traded for electronic triggers. But that’s the extent of the computerized help that you will find The Glide using. Other than that, they are still a live band, with two guitars, a bass guitar, keys/synthesizers, cymbals, a snare and a kick. “We use small samples, but none of them are longer then ten seconds long,” says Little. “Everything that happens is at least being triggered by somebody. We try to keep everything as live as possible.”

The Glide often finds itself in different live music environments, being a band that can cross genres easily. One night in December, they were at Bottom Lounge playing with Yourself and the Air, a straightforward rock band. But on other nights, they are on bills that are packed with electronic musicians. Really, all that matters, though, is playing for as many people as they can. “We all collectively agreed that to us the most important thing is getting the music into peoples’ hands and not worrying about getting a dollar amount back on it,” says Little. For this reason, The Glide offers its debut EP, “Ceremony,” for free on the band’s Web site, theglidemusic.com. “Our whole concept has always been to try to get the music to the people as easily as possible without charging them four or five dollars for a couple of songs that they’ve never heard before.” (Todd Miller)