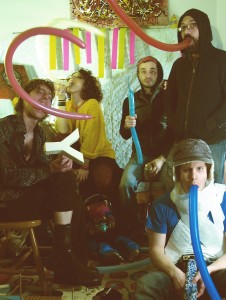 Unicycle Loves You is just trying to write some good, sustainable pop songs. “We’re going for stuff that’s catchy,” says vocalist and guitarist James Carroll, “but I like to think of it as some sort of candy coated darkness.” Just because the band’s songs sound light and airy, the vocals aren’t always that way. He is fan of strange lyrical subject matter, and while he wouldn’t call himself a necessarily unhappy person, “the lyrics are not necessarily happy, though sometimes they’re perceived as that,” says Carroll. “I see a lot of things that are not right with the world.” This is a technique that he learned from listening to artists like David Bowie and Arthur Lee.

With a sound that, to the chagrin of Carroll, has been often compared to one of the biggest pop indie-rock bands currently on the planet, Vampire Weekend, I also have to disagree. There is much more of a sound that is reminiscent of the sound of a band like Belle and Sebastian than the recently discovered, flavor-of-the-month Vampire Weekend. But, if it were up to Carroll, there wouldn’t be any of these band comparisons. “I don’t really like the comparisons to anything that we compare to.”

Unicycle Loves You released its debut, self-titled record in June 2008 on Highwheel Records. It was recorded at Engine Studios and produced by Brian Deck. “I had no experience recording in the studio before. It was brand new,” says Carroll. He wants to try things without a producer next time, now that the band is familiar with the way things work in the studio. “Now that we kind of get the hang of it, we want to give the second album a try.”

Now, nine month’s after the release, Carroll sees that release as a sort of demo that will be able to take them to the next level. Their contract with Highwheel was only for one record and the band, while grateful to the label, is beginning the initial stages of beginning the process of finding a label with more resources for advertising and promotion.

The band is currently trying to find that line that lies between potential commercial success and artistic integrity. “I definitely want to make a career out of music. It’s what I feel like I should be doing with my life,” says Carroll. His approach has been to observe bands that he respects who have made the jump into mainstream indie rock while not becoming lost in the corporate shuffle. He has taken example from bands like Spoon—“They got to a pretty good level, for the most part, on their own terms.” (Todd Miller)