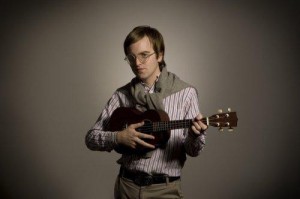 With a name like “Dent May and his Magnificent Ukulele,” a record title that explicitly calls itself “good-feeling music,” and an onstage persona that could be best described as “Elton John meets the fashion sense of Vampire Weekend,” it would seem to follow that Mississippi-based troubadour Dent May is 100 percent a joke. In actuality, it’s only like forty percent, and once the consequential awkwardness of figuring that out fades away, it’s hard not to enjoy May and his fairly decent ukulele (don’t buy this “magnificent” hype). With a martini-tinged voice destined to headline a swanky lounge near you, May’s cocky swagger carries “Good-Feeling Music” from one kitschy sixties showtune to the next, mixing heart-and-syrup-dripping-down-my-sleeve romanticism with silly comedy (including a love song to late 1980s tennis legend Michael Chang). While May’s gimmicky persona couldn’t possibly work for a second record without exceeding everyone’s tolerance for sugary tomfoolery, it’ll work for one, especially for anyone who grew up listening to the oldies radio station, or anyone wondering where all the “shoo-bee-doo-bee” backing vocals went. (Andy Seifert)