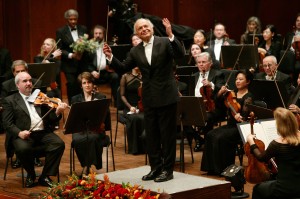 In a bizarre case of musical chairs, the very night that the Chicago Symphony Orchestra will be wowing New Yorkers at Carnegie Hall, the New York Philharmonic will be in Chicago as part of its farewell tour to current music director Lorin Maazel. As is well known, former Ravinia CEO and current New York Philharmonic executive director Zarin Mehta wooed Riccardo Muti to succeed Maazel, but Muti opted to come to Chicago instead, in effect nullifying the agreement he had made with New York to come there as principal guest conductor while the unknown Alan Gilbert would take over as music director next fall. As those who follow the Philharmonic know, the last smooth partnership was with Leonard Bernstein, who led the orchestra from 1957 through 1969. Pierre Boulez—who ironically is leading the Carnegie Hall CSO concert the same night that the New York Phil will play Chicago—succeeded Bernstein, pushing new and experimental repertoire and demanding a new level of precision and clarity for the orchestra that alienated the players. Zubin Mehta followed, but there was little chemistry between him and the orchestra, and was followed by Kurt Masur who, like Boulez, alienated the players by pushing them too hard. Maazel was seen by everyone as an interim music director on the way to Muti or former CSO music director Daniel Barenboim, but both got away. Thus, the Philharmonic is entering a period of great uncertainty next year and this is the orchestra’s swansong tour with a name conductor for the foreseeable future, bolstered by the fact that Maazel and the New Yorkers had a spectacular success as the first American arts organization of any kind to perform in North Korea last year. The centerpiece of the current tour is Stravinsky’s “The Rite of Spring,” a virtuoso showpiece undoubtedly included to show how the orchestra has kept its performing standards high despite changes over the years. Also on the program are Berlioz’ “Roman Carnival” Overture and Tchaikovsky’s Suite No. 3. (Dennis Polkow)