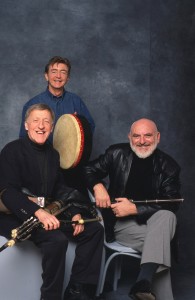 One hopes all is well with the spreading of the “Gospel o’ the Green” amongst the Chieftains, Ireland’s premier musical ambassadors with forty-four years of performing together behind them. For three decades of that span, the core personnel was the same until the 2002 death of harpist Derek Bell, whose musicianship and subtle showmanship was such that the group never formally replaced him, preferring instead to engage guest harpists. The group has never been quite the same, but continued on full steam ahead as a quartet. This tour, however, four is down to a trio as fiddler Sean Keane opted out this time around “to spend time with family,” and the group is not performing its usual Carnegie Hall St. Patrick’s Day performance. The billing for this year’s truncated tour is “Paddy Maloney & the Chieftains,” founder and uilleann piper Maloney—for this tour, one-third of the act—being given front billing. Given that “chieftain” is Irish for “leader” and the group name implies a collection of leaders, the billing seems particularly odd. (Publicity photos consist of those with Keane off to one side where his image is simply cropped away, leaving Maloney, flutist Matt Malloy and singer and bodhranist Kevin Conneff.) Fiddler and dancer Jon Pilatzke has been engaged as Keane’s tour replacement along with harpist Triona Marshall and special guests including Nashville guitarist/vocalist Jeff White, Scottish singer Alyth McCormack, dancers Nathan Pilatzke and Cara Butler and fiddler Deanie Richarson. The group is wrapping up work on a new album on the Mexican-Celtic music connection and repertoire from those sessions will be heard along with plenty of group standards. (Dennis Polkow)