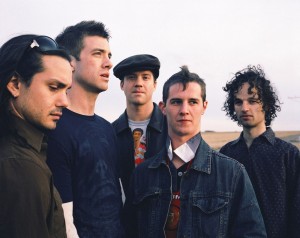 By listening to the music made by Toubab Krewe, you would never guess that all its members hail not from the Western African nation of Mali, but from Asheville, North Carolina, where the band recorded “Live At The Orange Peel,” which was captured live at the same venue where the Smashing Pumpkins kicked off their reunion tour last year. Toubab Krewe’s trademark sound is a blend of various influences—though Africa is the most obvious reference, one also notices that there is a lot of other musical elements, such as rock, reggae and New Orleans-style grooves (the name “Krewe” comes from the regional spelling of “crew” in Crescent City). An example of this is the uptempo “Kaira,” which begins with a kora (African lute) solo from Justin Perkins. He is joined by the other members about a minute into the track, taking the melody more into West Indian territory. Hearing Toubab Krewe’s music might spark curiosity to learn more about the music of Africa—consider this a gateway to cats such as the late Ali Farka Touré, Salif Keita, Amadou & Mariam, Oliver Mtkudzi and many others who regularly tour the States. (Ernest Barteldes)