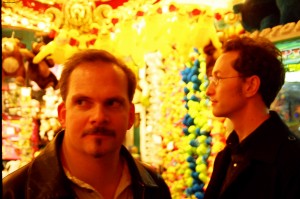 Los Angeles jazz-inspired duo I Heart Lung crafted “Interoceans” over a three-year period, beginning first with a two-day recording session in which the two—guitarist Chris Schlarb and drummer Tom Steck—laid down fully improvised tracks and later went back, adding and subtracting bits here and there with the help of several guest musicians, including Nels Cline and trumpeter Kris Tiner. Finally four long separate tracks emerged and a record was born. An instrumental, drone-based mood piece, “Interoceans” is unmistakably an after-hours record, comparable to Talk Talk’s great “Laughing Stock.” When Tiner’s trumpet emerges during “Interoceans II (Overturning),” you hold your breath, it’s so hypnotizing. Patiently assembled, I Heart Lung has woven a wonderful work, an open-air soundtrack with a bleeding, wounded heart.

“We recorded the basic tracks in two days, and then spent the next year figuring out what it was going to be,” Schlarb says. “Over the next two years, we started to carve out the style, I guess a sort of tonal idea of what it was going to be. What instruments were going to be on there—obviously there are certain things that don’t work in the I Heart Lung context, like piano. It just wouldn’t sound right.”

Seems like such a meticulous process would grow frustrating. “It was definitely frustrating, but also necessary,” Schlarb says. “I spent a month of five- or six-hour days just mixing the record. It was really akin to a sculpture, where you have to carve out something meaningful from a big rock. With all of these overdubs I did, I basically had people play from the beginning of the track until the end, and I would mute them and bring them back in at certain places, until it took some sort of shape. It was a really weird way to work.”

Not surprisingly, I Heart Lung doesn’t put much effort into recreating the record on stage. More of an improvisational affair, Schlarb says that the live set is usually much more aggressive, more powerful than that of the material the band’s put to tape. Not that he thinks what that band’s recorded is unworthy. “It’s kind of funny,” he says, “but I’m so proud of the record now. Ultimately, I think Tom and I are trying to make music that we would want to listen to. A record like ‘Interoceans,’ I don’t know, to me it’s a record that I wished I had found, you know? In some ways, it’s the sum of all these different influences of mine, and it’s really satisfying for me to listen [to it], which isn’t always the case.” (Tom Lynch)