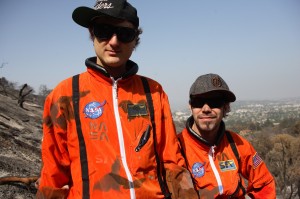 It’s 2pm outside of Los Angeles, and Sam Spiegel, aka Squeak E. Clean, is cruising down the freeway after a late breakfast with his girlfriend. “Late night, actually,” he explains. “We went out, had some drinks and got wild.” You can’t blame the guy for feeling a bit celebratory. After all, his new NASA project with buddy DJ Zegon (Ze Gonzales) has just released its debut album, “The Spirit of Apollo,” after five-plus years of conceptualizing, collaborating and recording.

The pair first met at a party in LA, with their love of Brazilian music first breaking the ice, and a recording session scheduled for the very next day. Zegon had been crashing at famed Beastie Boys producer and fellow Brazilian Mario C.’s place. “I brought my MPC drum machine and made our first track together,” recalls Spiegel.

The partnership eventually evolved into a concept—NASA, which stood for “North America South America.” Initially, they reached out to friends they knew, like Fatlip and Slim Kid Tre from Pharcyde. But as their ambitions grew, so did their list of collaborators.

“Sometimes it took years to reach out to someone and get them in the studio,” says Spiegel, who managed to score high-profile guests like David Byrne, Kanye West, Santogold and Lykke Li, to name a few. “Every song we’d reach out to the craziest possible pairing that we could possibly imagine—people that were from totally different worlds, but that totally made sense in the weirdest fucking way.” A drunken recording of Karen O. backing up ODB on “Strange Enough” definitely matches the description, as does Tom Waits’ gravelly, guttural voice juxtapositioned behind Kool Keith in “Spacious Thoughts.” “I actually went up to Northern California and recorded with [Waits] up there, in this really crazy log cabin studio in the middle of nowhere. I literally was driving up two hours north of the Bay area and finally found it…I didn’t even think it was a studio!” marvels Spiegel.

Despite the studio nature of their guest-heavy debut album, NASA is touring behind “The Spirit of Apollo,” with Saturday’s stop at the Abbey Pub coming just over a month and a half before a coveted slot at the Coachella Music and Arts festival outside of Palm Springs, CA. “Me and Zegon are first and foremost party-rockin’ DJs,” says Spiegel. The tour features a 2 x 4 DJ set of their original works and edits, with custom video that they’ll be controlling with their turntables. “We also recruit extraterrestrials from the surrounding city or area to come perform with us…it ends up being like a crazy intergalactic circus.” So basically, anyone can show up early and have a chance at being part of NASA’s stage show, right? “Well…they have to be aliens,” clarifies Spiegel. (Duke Shin)