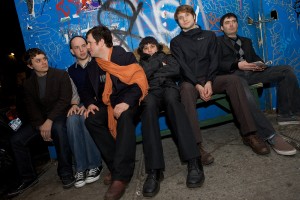 I’ve never had to try too hard to dislike …And You Will Know Us by the Trail of Dead. The overwhelming amount of bombast and prickliness—and overall dedication to hugeness and mammoth everything—rubbed me wrong. Too much noise, too many pieces, too much attitude to be embraced. The Austin-born, now Brooklyn-based rock band had substantial success with its 2002 major-label debut “Source Tags & Codes,” receiving several “monumental” and “essential” compliments and even the rare 10.0 rating from Pitchfork, and while it’s clearly the group’s most accomplished work, beloved by several notable critics, legions of fans and, most importantly for me, my younger sister, who has exceptional taste, I could never think of it as more than a tornado of whiny horseshit.

Theories of mine were confirmed with Trail of Dead’s next two records, 2005’s especially bad “Worlds Apart” and 2006’s entirely forgettable “So Divided” (seriously, I forgot it even existed), a duo of albums that awarded the band with masses of unhappy fans, spawned some negative criticism and threatened to erase what the outfit had accomplished with “Source Tags.”

But I always respected the ambition. Giant orchestration has its place in indie-rock, though it would seem by definition the two should be miles apart. (How indie-rock can you be on Interscope after all?) “The Century of Self,” the band’s sixth record, came out a few weeks ago via Justice Records imprint Richter Scale, and being rid of Interscope has immediately done the band some good, as Trail of Dead’s done exactly what it should’ve done years ago, after “Source Tags”—scaled back. It’s not like it’s lo-fi or anything, but it seems like Conrad Keely and crew have focused less on the big and bold and more on the actual songwriting. If this record is somehow your introduction to the band, this won’t make any sense. But if you’ve had the misfortune of sitting through “Worlds Apart” and “So Divided,” or even if you still cling to the promise the band showed with “Source Tags & Codes,” “The Century of Self,” despite its “meaningful” title, comes as a breath of fresh air. The song that sticks with me most is “Fields of Coal,” which features a sing-along build-up that starts with a whisper and develops into a rambling babble-fest that somehow, in some way, works. (The snare-crazy bit in the middle is inspired.)

That’s pretty much the story of the whole record. It develops in a natural way that maybe no one, except the band, can completely understand. And it’s difficult to not appreciate that sort of accomplishment. I almost like it.

It’s not surprising, in the least, that Keely talks a big game. “I want to advance music. I want to see it evolve. I want to innovate the rock idiom in the way all of my real idols did,” he says, without an ounce of sarcasm. “By that I would include Igor Stravinsky and Tchaikovsky, people that took the music of their time and wrote it into the future. I know that’s a big goal. I feel like we’re in our own corner, with no real immediate, not peers, but—sometimes I feel like our ambitions get misunderstood. That’s fine though, because that’s what happens when you try to, I guess, when you experiment with something that hasn’t been done.”

While he admits the years since “Source Tags” has been somewhat difficult for the band, Keely doesn’t regret any of it. “I think our output reflected what we were going through as a band,” he says. “They were very difficult times for us, the last record being the most difficult. [It was a] reflection of what we’ve been going through personally. I never think of what we’ve been doing as anything that’s not indicative of absolute sincerity. I stand behind all of it. I know there are a lot of fans who didn’t like the last record, but, I didn’t write it for them. I wrote it for me. They can listen to something else.”

It is indeed difficult to pinpoint Trail of Dead, the gigantic ambitions, the attempts at advancing the world of music. To pigeonhole the band into a specific genre is an exercise in ignorance, and Keely knows it. “We’re not deliberately trying to stay genreless, or not sound like anyone else,” he says. “This is just the way we look at music. If you look at the massive historic whole, the traditions that [have been] passed down, the generations of folk singers, classical composers, minstrels, jazz musicians—we’re not writing for, I guess, what’s been typified as the sex, drugs and rock ‘n’ roll cliché, you know?”