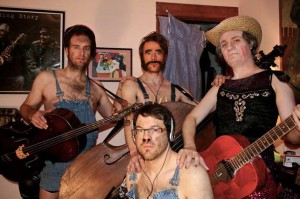 “Initially, we were just sort of an obnoxious folk band,” says Alan Scalpone, vocalist/guitarist/various-instrumentalist for The Bitter Tears. “We didn’t really take music that seriously.” Then they discovered some new instruments, including a bass clarinet at a resale shop and started in a new direction. The quartet soon cut back on hours at work to learn to play these new instruments.

What resulted is a sort of a hobo rock. Maybe it’s the promotional pictures that the band uses, or maybe it’s the blend of guitars, brass, woodwinds, accordions and strings that the band employs, but I can imagine myself on the side of a dusty road in Oklahoma or in a boxcar with Sal Paradise while I listen to these songs.

On Saturday, The Bitter Tears will perform at Hideout in celebration of the release of the band’s second album, “Jam Tarts in the Jakehouse.” “It’s old slang. The definition of both terms, jam tarts and jakehouse, have changed over time,” says Scalpone of the album’s title. “I have my own interpretations, which is an effeminate man in jail.” The album is being released on Carrot Top Records and has been a long work in progress, spanning over the last three years.

Lyrically, Scalpone and vocalist and multi-instrumentalist Michael McGinley, who share a majority of the songwriting, touch on subjects like crooked political candidates, light pollution and paralyzed senior citizens. “I think there’s a bit more general theme of male impotency. I’d have to consider that some more,” says Scalpone.

As for playing the show at Hideout, a beloved venue by the band, they are excited. “Tim Tuten and all of those Hideout people were really supportive of us in the beginning when we absolutely did not have our shit together,” says Scalpone. “I don’t know if we have our shit together now, but they certainly, they got it.”

As well as the newly released “Jam Tarts in the Jakehouse,” the band is planning a European tour and is also in the initial stages of a putting together a new Bitter Tears musical. Having already done musicals at Hot House and Trapdoor Theatre in the past, the band is currently considering subject matter for the next one, one possibility being the story of a latchkey kid. (Todd Miller)