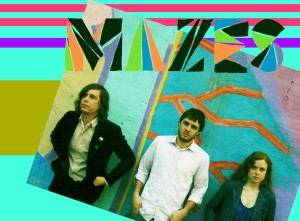 Many times, songs are written by a band or by a songwriter for a band and they don’t work for one of a variety of reasons. Maybe they just don’t fit in with the overall sound of the record, or maybe the subject matter is too personal. But, for whatever reason, they just don’t fit for that band, for that record. Usually these songs are set to the side or they are forgotten on a hard drive or a cassette tape, but Edward Anderson of The 1900s wasn’t content with letting that happen. The result is Mazes.

“Some of the songs date back to about 2003,” says Anderson. “They were just demos sitting on a four-track for years and I decided to clean house on any potentially worthwhile stuff.” While some of the songs were re-recorded for Mazes’ self-titled debut, some songs also made the record as the initial demo versions, and others were written and recorded new for the album.

Mazes is comprised of Anderson and Caroline Donovan, both of The 1900s, and Charles d’Autremont, among many other friends who contributed in various ways. “Charlie’s influence and musicality can be found all over this record,” says Anderson. “He played a huge part in performing, arranging, recording and mixing. He was a painter for years, and only relatively recently started playing music-which I think provides a unique perspective.”

Though the initial idea, according to Anderson, was to make a “super lo-fi psychedelic country album,” those songs were dropped, and the ones that were kept were the ones that simply felt the best. The songs that remain are simple, honest, personal songs that do have more of a lo-fi feel than The 1900s songs usually tend to have. They’re not as clean and polished, but that’s not a bad thing.

Anderson sees Mazes as an opportunity to take chances that he may not necessarily take with The 1900s. “The process of doing Mazes has made me realize that The 1900s don’t have to be stuffy.”

This record was also an opportunity for Anderson to collaborate with musician friends around Chicago-Scott Masson (Office), Devin Davis and Graeme Gibson (Disappears, Fruit Bats, Joan of Arc). “These are musicians with incredible talent. The songs pretty much called out for these dudes, I wasn’t just trying to fit them into whatever,” says Anderson. “I never played them the songs; they’d just come over, have a couple beers and then hit the record button.” Anderson also had an opportunity to team up again with Kristina Dutton, an original member of The 1900s and friend from high school. (Todd Miller)

“Mazes” will be released on March 17 on Parasol Records.