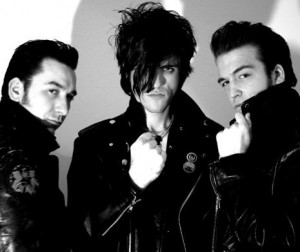 I feel like Calabrese—the self-proclaimed “world’s greatest horror rock band” whose last album, “The Traveling Vampire Show,” opens with a woman ominously saying, “Death is no prison to those who have given their souls to the prince of darkness”—would be some joke band my friends and I’d conceive and eventually disregard during high-school lunchtime. Maybe none of my chums wrote a song called “Phantasmagoria” about an Ouija board imploring pestered souls to slit their wrists, nor did anyone pen lyrics like, “Like a bat in flight/Mortals go to hell/We’re already dead/Hypno eyes will turn/Virgin minds will burn/Taste of blood tonight,” but I’m pretty sure some of the same cataclysmic, apocalyptic subject matter (like eating flesh in the middle of a graveyard, or driving a hearse at midnight) was playfully bandied about. So while the slicked-back hair and leather-jacket-donning dudes in Calabrese are mostly focused on crafting an homage to cheesy old horror films within some stupid, AFI-influenced ghost-punk context, they’re also sort of an homage to ridiculously conceived rock bands everywhere. (Andy Seifert)