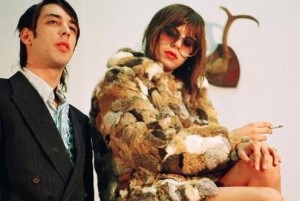 Wolf Parade semi-frontman Dan Boeckner and his wife Alexei Perry took a trip to mother Russia recently and were so struck by the remnants of Soviet-era culture that they decided, as most of us do after memorable vacations, to produce an album about it. The Montreal couple makes music under the name Handsome Furs, and the band’s sophomore effort, “Face Control,” is rife with subtle social commentary on Soviet life (or—shocker!—are they talking about us?) and Euro-dance sensibilities. What does music sound like for young comrades in Petrozavodsk? A ton of distortion, sustained past the point no return, cold and menacing synth beats and really cheesy, computer-crafted strings and handclaps. If you disregard the political undertones, it’s a pretty fun record, even when not sounding overly Russian (in fact, tracks like “Talking Hotel Arbat Blues” and “Radio Kaliningrad” curiously sound influenced by Bow Wow Wow’s “I Want Candy” and the “Footloose” theme song, respectively). At the very least, this is great music for playing Tetris. (Andy Seifert)